Facebook posts
stated on May 23, 2021 in a Facebook post:
The sale of more than 600,000 Wisconsin deer licenses shows that Wisconsin’s hunters are the “eighth largest army in the world.”

You might not picture a troop of Wisconsin deer hunters when thinking about global military powers, but some social media users are out to change that.

"There were over 600,000 hunters this season in the state of Wisconsin," read a 2021 Facebook post. "Allow me to restate that number: 600,000! Over the last several months, Wisconsin’s hunters became the eighth largest army in the world."

The post went on to claim that although 600,000 people were "deployed to the woods of a single American state, Wisconsin, to hunt with firearms … NO ONE WAS KILLED."

The post began amassing more shares in recent days following a series of deadly mass shootings around the U.S.

The sweeping claims overstate what can be learned from deer hunting licenses and overlook what we know about the comparative size of military forces around the world.

Wisconsin reported that 820,299 deer hunting licenses were sold for the 2020 season, which would have been the most recent season when the post was first shared on May 23, 2021. While this number surpasses the 600,000 figure shared in the Facebook post, it included bow and crossbow licenses, not just gun hunting licenses, according to the Wisconsin Department of Natural Resources.

Of the total number of deer licenses sold, 569,203 were for gun privileges, according to the preliminary license sale figures released on Dec. 1, 2020.

However, there’s no proof that each of the people who purchased licenses to hunt with firearms in Wisconsin are state residents. Wisconsin sells non-resident licenses for gun deer hunting. The department said non-resident license sales decreased in 2020, likely because of the COVID-19 pandemic, but did not give an indication of the usual number of these sales. 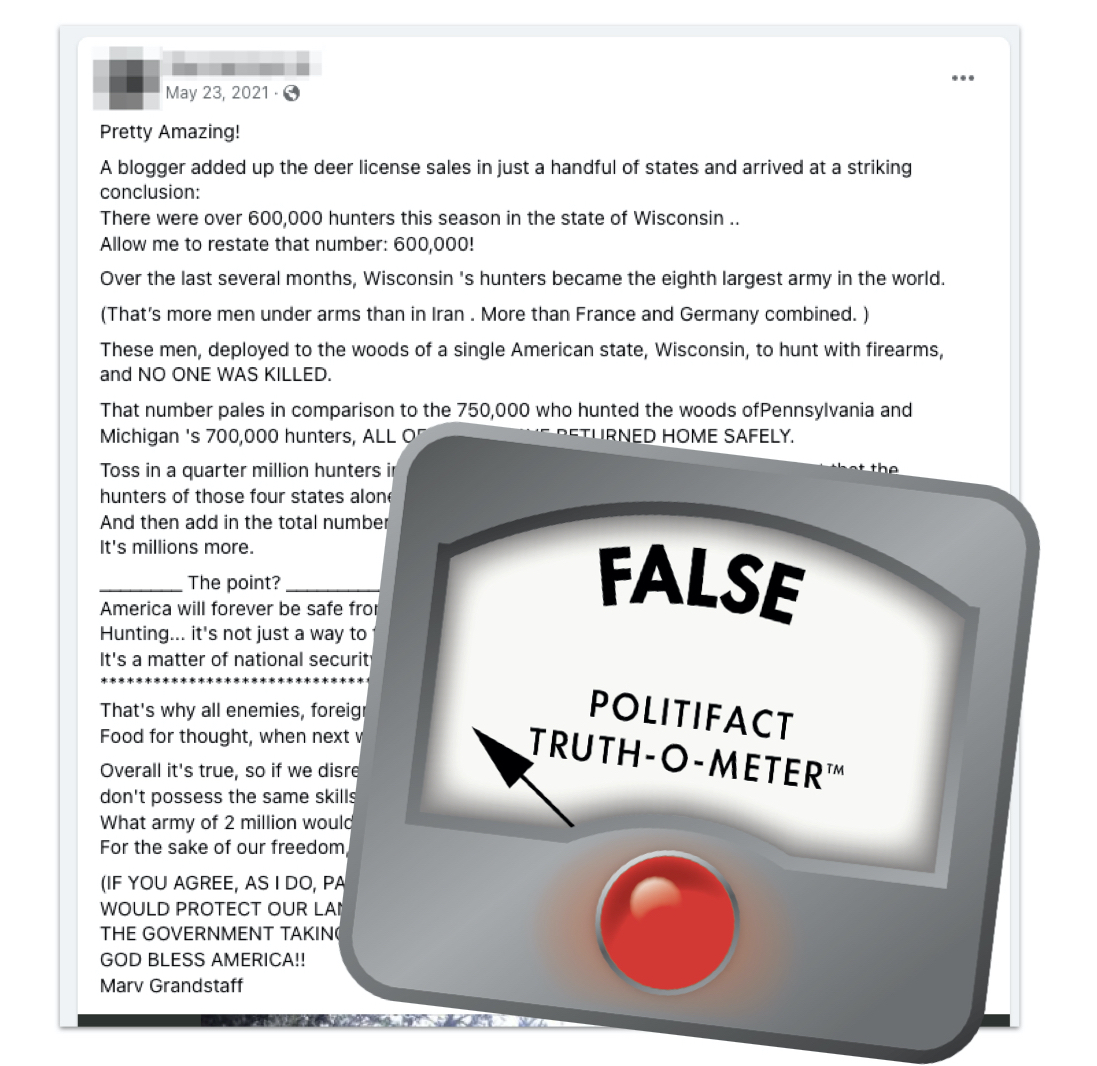 The department did not respond to PolitiFact’s request for finalized numbers or information about the number of Wisconsin residents who hunt with firearms.

The Facebook post also inflated the number of deer hunters in Michigan. Ed Golder, a spokesperson for the Michigan Department of Natural Resources, said that in 2020, Michigan had 616,235 unique deer hunters, or individuals who bought a deer license of any type for the season. Nearly 80% of them — or 488,422 hunters — participated in the regular firearm deer season, Golder said.

We did not find data on the number of deer hunters in Pennsylvania in 2020, and the Pennsylvania Game Commission did not respond to PolitiFact’s information request.

The post was also incorrect by suggesting that "no one died" while hunting. In Wisconsin, there were 18 hunting-related gun incidents that included one death during the 2020 hunting season.

Even if 600,000 armed hunters lived in Wisconsin, the group wouldn’t constitute a strikingly large global force, as the post claimed.

There aren’t many country-by-country comparisons of military force size, but 2021 data from the International Institute for Strategic Studies indicates that more than 10 countries have at least 1 million military personnel.

An army of 600,000 wouldn’t make the top 15 largest military forces when comparing estimated total military personnel, according to 2022 data from Global Firepower, an organization that evaluates military strength and assigns countries rankings.

Global Firepower’s data indicates that more than 10 countries have forces in which the total number of military personnel is estimated to exceed 1 million. This includes the organization’s highest-ranked militaries overall: the U.S., Russia and China.

A post claimed that the sale of more than 600,000 Wisconsin deer licenses shows that Wisconsin’s hunters are the "eighth largest army in the world."

The post inflates the number of gun deer hunting licenses sold in Wisconsin for the 2020 hunting season by more than 30,000. There’s also no indication that each of the roughly 569,000 gun deer licenses sold were sold to residents of the state. Some were sold to non-residents.

Even if Wisconsin had 600,000 deer hunters who use firearms, the group would not be the eighth largest army in the world.

GoWildAgent.wi.gov, "What is the Conservation Patron License?" accessed June 3, 2022

Business Insider, "This is how the US and Iran rank among the world's 25 most powerful militaries," Jan. 7, 2020