Sam Hyde has been accused of a lot of things over the years, and none of them good. At least until recently.

Hyde is a real person, but he’s not the gunman behind mass shootings, the massive explosion in Lebanon, or COVID-19, despite what you may have read online.

He’s a comedian-turned-internet-meme, and his name has popped up again, this time as Samuyil Hyde, the alleged heroic pilot known in Ukraine as the "Ghost of Kyiv." The pilot is rumored to be responsible for shooting down six Russian planes in one day by himself as the country defended itself against invasion from its northern neighbor.

A Feb. 25 Facebook post said that the "Ukrainian fighter-ace known as the 'Ghost of Kyiv's real name is Samuyil Hyde, a 36 year old who was identified as the Mig-29 Pilot accredited with downing 6 Russian Jets." 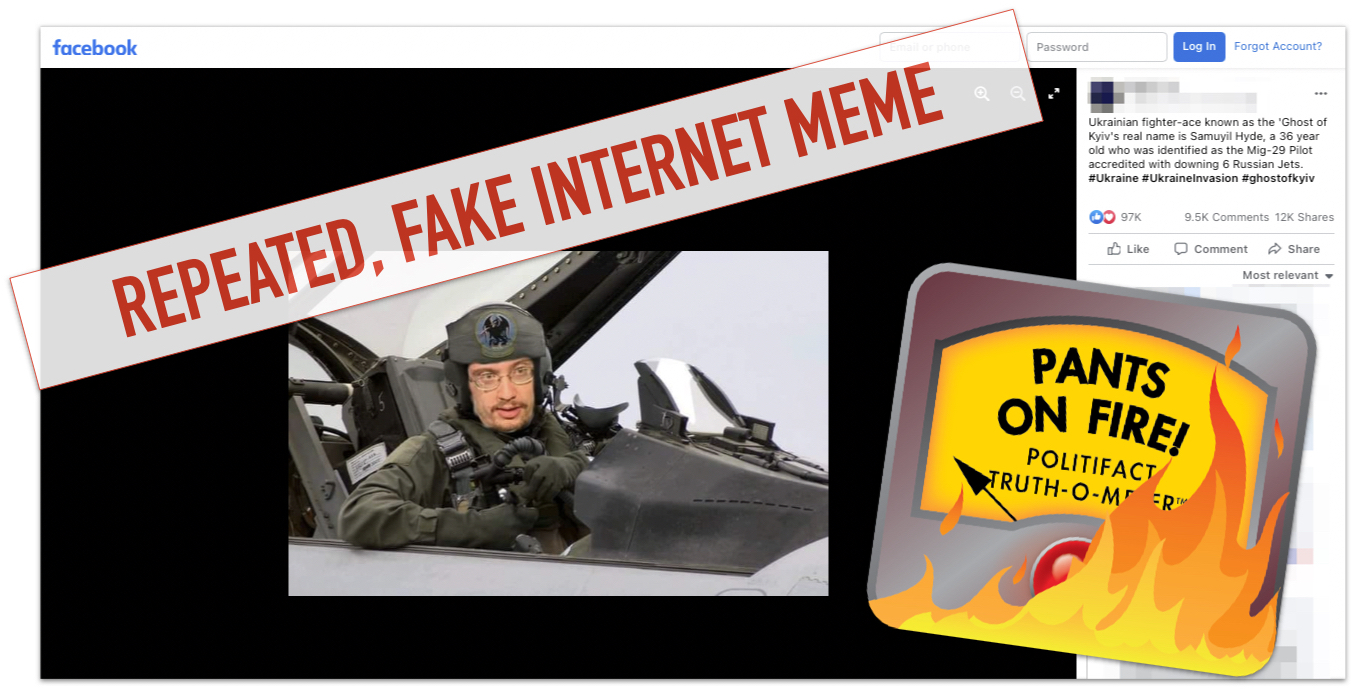 Hyde was a member of the comedy group behind the Adult Swim show,
"Million Dollar Extreme Presents: World Peace," which was canceled in 2016 after accusations that the show promoted racism, bigotry and sexism, Rolling Stone reported.

Internet hoaxers have used Hyde’s name to trick people since at least 2015, PolitiFact reported, tying his name to mass shootings in Florida, Texas and Pennsylvania, as well as other tragic events.

The hoax fooled Texas U.S. Rep Vicente Gonzalez in 2017. Gonzalez, according to The New York Times, told CNN viewers live on air that the gunman responsible for killing 26 people at a church was identified as Sam Hyde.

As for the "Ghost of Kyiv," it’s not clear that the pilot actually exists or is just a legend in the making. Numerous fact-checkers, including PolitiFact, have debunked videos that supposedly show the fighter pilot in action or being tragically shot down.

There’s no evidence that the supposed heroic pilot exists, but if he or she does, it’s not Samuyil Hyde. Sam Hyde does exist, but he’s a comedian whose name has become an internet meme linked to tragic events such as mass shootings throughout the world since at least 2015.

Lead Stories, "Fact Check: Sam Hyde Was NOT Driving The RV That Exploded in Nashville," Dec. 26, 2020

Rick Scott
stated on October 2, 2022 a television interview:
Kamala Harris said about Hurricane Ian that “if you have a different skin color, you're going to get relief faster.”

Instagram posts
stated on August 21, 2022 an Instagram post:
“America now has a government that forbids border agents from using deadly force, but is training IRS agents to use SWAT-team tactics on law-abiding citizens.”

Facebook posts
stated on September 27, 2022 a Facebook post:
At an Atlanta Braves celebration, President Joe Biden “demanded that all the little kids come up on stage to sit on his lap.”