Militia men carry the coffin with the body of Volodymyr Nezhenets, 54, during his funeral in the city of Kyiv, Ukraine, March 4, 2022. (AP Photo)

Russia’s military invasion of Ukraine has brought on an onslaught of attacks, injuries and deaths for more than a week. But according to one claim on Facebook, the war is fake.

The Feb. 25 post showed a photo of the Joker from the Batman film, "The Dark Knight'," with text overlaid that read, "Them: Let’s pray for Ukraine! Me: It’s all scripted and staged."

The accompanying text post read, "Russia and Ukraine is a coverup!" and linked to a nine-minute YouTube video that falsely claimed the war is a coverup to distract from COVID-19, which it says was also planned and staged.

First off, COVID-19 is real. PolitiFact named claims to the contrary its 2020 Lie of the Year. Statistical data, hospitals, medical workers, news reports and more show that the pandemic is authentic, and has caused millions to get sick or die.

As for war in Ukraine, daily evidence proves that there is indeed a war.

During the early morning of Feb. 24, after months of increased Russian military presence near the Ukrainian border, President Vladimir Putin announced the invasion into Ukraine in a televised speech, calling it a "special military operation."

Putin said that the reason for the invasion was to protect people from "abuse and genocide from the Kyiv regime" —  we rated that False. He also said that the attack was a preemptive measure against the growing alliance of NATO countries in Europe and its expansion closer to the Russian border.
Within less than 20 minutes of Putin’s announcement, missile strikes hit locations near the Ukrainian capital of Kyiv, which was soon attacked afterward. CNN reported that strikes quickly spread across the country, and Ukrainian airports were prime targets for attacks.
That same day, Ukrainian President Volodymyr Zelensky ordered martial law across the country, a temporary substitution of military rule over civilian authority. 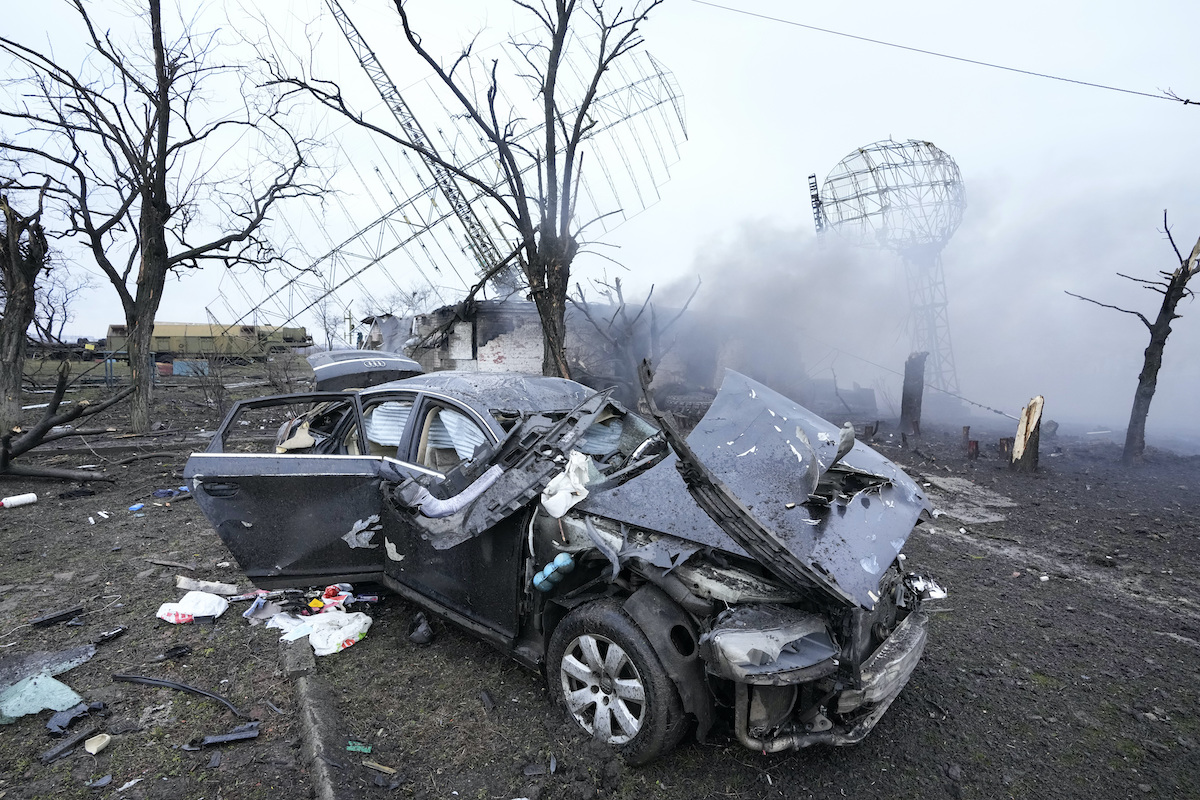 Before the Russian invasion, numerous Ukrainian civilians volunteered to become fighters and took part in military training. Now, they’re on the frontline. NPR, The New York Times and other news sources have extensively covered the situation in Ukraine, where journalists and citizens have transmitted images depicting the war effort.

The exact number of civilians killed is unknown, but as of March 2, Ukraine’s State Emergency Service estimated more than 2,000 Ukrainians dead, according to CNN. On March 4, the United Nations gave a lower count of 331 people killed, including 19 children, and 675 who were injured. But "the real toll is likely to be much higher," Liz Throssell, U.N. spokesperson, said.

The U.N. reported that most civilian deaths in the first eight days of conflict were "caused by the use of explosive weapons with a wide impact area, including shelling from heavy artillery and multi-launch rocket systems, and missile and air strikes."

Russia has also reported casualties. The Russian Defense Ministry announced that 498 Russian troops have died and 1,597 more have been injured, NPR reported.

With the impact of the war on civilians being publicly reported, and both sides reporting troops’ deaths and injuries, the claim that any of this is being staged proves to be baseless.

Even more evidence that the conflict is real: the swift response from other countries. NATO has stated they will not engage in the war, but have taken other means of action against Russia. The United States, the European Union and the United Kingdom have joined together in implementing harsh economic sanctions against the Russian economy.

During his State of the Union Address on March 1, President Joe Biden announced that, in addition to cutting off Russia's largest banks from the international banking system, the U.S. "will join our allies in closing off American air space to all Russian flights – further isolating Russia – and adding an additional squeeze on their economy."

The value of the ruble, Russia’s currency, has fallen to less than one U.S. cent. Rising prices on some products like electronics and appliances have caused citizens to stock up, and NPR reports that arrests of anti-war protesters in Russia are racking up. They cite a Russian human rights group called OVD-Info, who’ve counted more than 8,000 arrests.  Wealthy elites, who also face sanctions, have criticized Putin’s invasion of Ukraine.

Scott Radnitz, an associate professor of Russian and Eurasian studies at the University of Washington, viewed the Facebook post and video, and said that the claim hinges on a world domination conspiracy theory — but there is no evidence presented for why or how the war is being staged.

"There is little to refute directly, other than to note that thousands or millions of people would have to be in on any conspiracy to fake a war, and like the 9/11 attacks (which some people also deny) there is substantial video footage of attacks on Ukrainian cities, Russian invading forces, and throngs of refugees," Radnitz said.

Nevertheless, he added, "a true believer will persist in denying all that evidence, something that is easier to do when the conflict is geographically distant and they do not personally know anyone directly affected by it."

With a war raging, the world responding and both sides of the conflict experiencing its effects, the claim that the Russian invasion of Ukraine is "scripted and staged" holds no merit. We rate it Pants on Fire!

PolitiFact Lie of the Year: Coronavirus downplay and denial, Dec. 16, 2020

CNN, Here's what we know about how Russia's invasion of Ukraine unfolded, Feb. 24, 2022

The New York Times, How Volodymyr Zelensky rallied Ukrainians, and the world, against Putin, FEb. 27, 2022

NPR, Ukrainian civilians are inspired to train for a possible war with Russia, Jan. 19, 2022

NPR, Russia confirms casualties in Ukraine ahead of the next round of talks, March 2, 2022

NPR, How everyday Russians are feeling the impact from sanctions, March 2, 2022

CNBC, ‘War can never be the answer’: Russia’s wealthy elite speak out against Putin’s invasion, March 2, 2022

Email interview with Scott Radnitz, associate professor of Russian and Eurasian studies at the University of Washington, March 3, 2022