Facebook posts
stated on March 14, 2022 in a Facebook post:
Comparing the price of oil and gas in June 2008 to March 2022 shows that oil companies are “price gouging.”

Gas prices are displayed at a gas station in downtown Los Angeles on March 9, 2022. (AP)

In early March, the price of oil shot up rapidly in response to Russia’s invasion of Ukraine and the United States’ decision to ban imports of Russian energy. Coupled with inflation, increased labor costs and other factors that had already raised the price of gasoline, drivers in the U.S. quickly saw much higher prices at the pump.

By March 14, the price of oil started to drop, but gasoline prices have been slow to follow, prompting some social media users to make comparisons to 2008 and accuse oil and gas companies of "price gouging." The term is generally used when businesses take advantage of rising demand during a crisis and charge exorbitant prices for necessities.

"If you’re blaming anyone but greedy oil companies for their price gouging, you’ve bought into propaganda that hurts you more than anyone else," the March 14 post said.

The post was flagged as part of Facebook’s efforts to combat false news and misinformation on its News Feed. (Read more about our partnership with Facebook.) Other posts similarly claimed that because oil prices fell and gas prices didn’t, companies must be exploiting consumers. 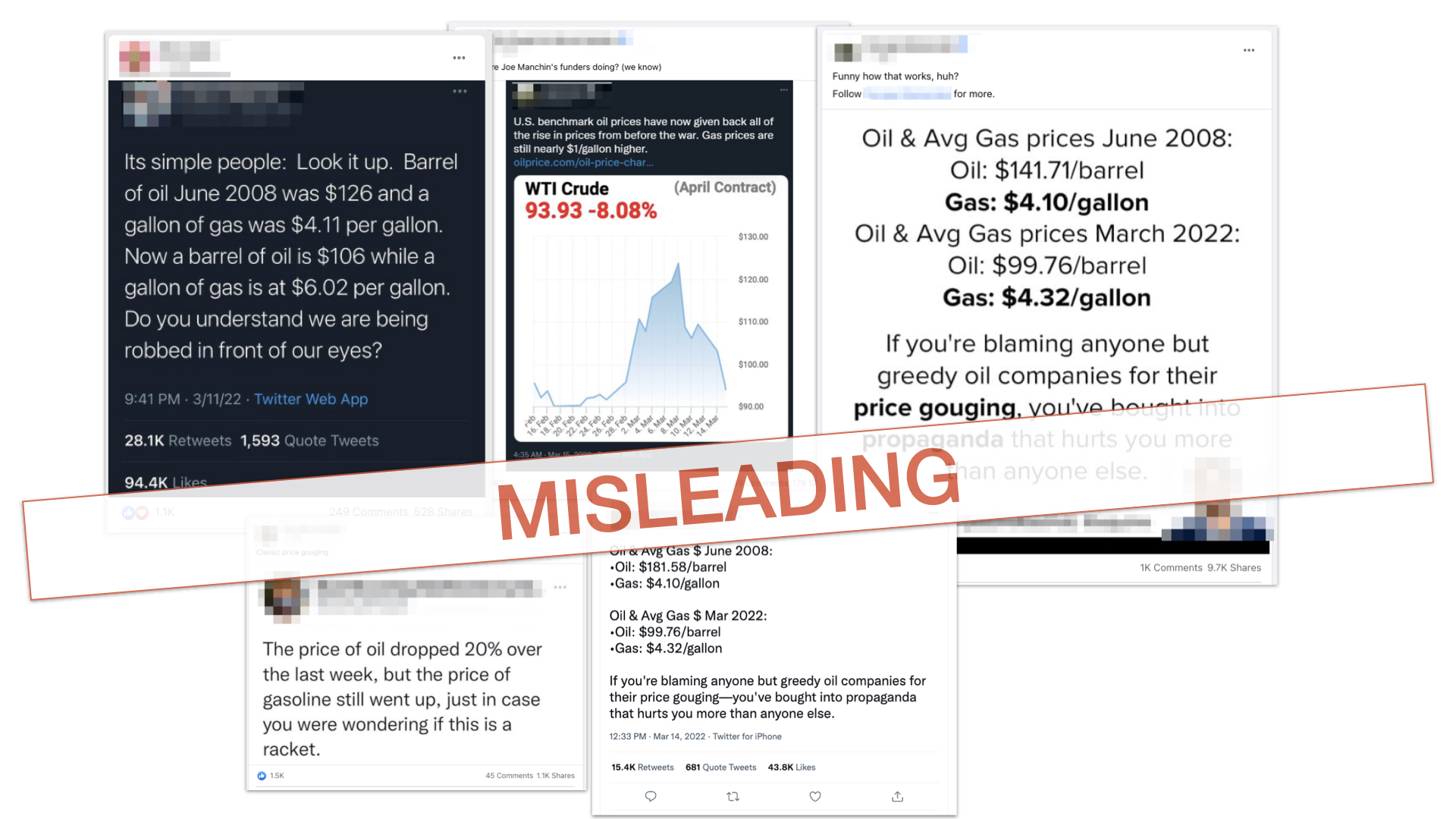 Experts who study the price of oil and gas told PolitiFact that it takes more time for gas prices to respond to changes in crude oil costs — and noted that there are factors in 2022 that weren’t at play in 2008, which make direct comparisons misleading.

The numbers are also cherry-picked, and the difference in pricing between 2008 and 2022 isn’t as large as the post suggests.

How fast are changes in oil prices reflected in gas prices?

Crude oil prices are set in the global market. And the price of crude oil has the biggest impact on the price of gasoline — that’s been the case for nearly all changes in retail gasoline prices in the past 35 years, said Mark Finley, a fellow in energy and global oil at Rice University’s Baker Institute for Public Policy.

When Russia — the world’s third-largest oil producer — attacked Ukraine at the end of February, the uncertainty, fear of further conflict and international efforts to reduce reliance on Russian oil drove up crude oil prices.

After oil prices fall, it typically takes a while for gas prices to decrease and consumers "often assume foul play" even when there isn’t any, said Nicole Petersen, a GasBuddy spokesperson.

Gas stations lose profit when oil prices increase sharply because they cannot drastically lift gas prices due to local competition, Petersen said. Then, when oil prices fall, gas stations try to recoup any losses before lowering their prices, she said.

Unique factors in each state’s gasoline market also affect gas prices, said Devin Gladden, a AAA spokesperson. Locally, gas stations might have contracts with gasoline dealers that lock in prices at a certain rate for set periods of time — sometimes weeks or months, he said.

But it cherry-picked its $99.76 figure for the price of crude oil. West Texas Intermediate crude oil is traditionally used as a U.S. benchmark when discussing and comparing oil prices. On March 14, WTI crude oil hit a low of $99.76, but the closing price was $103.01.

Gas rose to $4.32 per gallon on March 14 as a result of oil prices being around $130 per barrel at times in the first half of March, Gladden said.

The Facebook post was wrong about prices in June 2008. The monthly average price of a gallon of gasoline was $4.05, and the average price of WTI crude oil was $133.88 per barrel, less than what the post claimed.

"The data set in this posting is misleading because it gives people this impression that crude prices are more stationary than they are," Gladden said. "In all actuality, they are highly volatile."

Posts comparing June 2008 prices to current prices also mislead because they compare a full month of data to half a month in 2022, experts said.

In 2008, the spike in oil and gas prices was tied to the financial crisis. The recession caused a drop in demand for gasoline, and as the economic recovery began, there was an "immediate ramp-up" in production to meet growing supply needs. That "supply crunch," caused prices to spike, Gladden said.

In March, the Russia-Ukraine conflict caused "panic and speculation" that contributed to the rapid price rises, Gladden said. But it’s also normal for prices to rise this time of year due to the demand from the spring and summer driving season, he said.

In part, that will "keep prices elevated even though oil prices have declined," Gladden said.

Also, an ongoing truck driver shortage, increased labor costs and high inflation in the U.S. have caused gas prices to rise. On top of that, Gladden said the oil industry is still recovering from the COVID-19 pandemic, which decreased gas prices due to decreased demand.

State-level taxes on gasoline are also about 7 cents higher per gallon now than they were in 2008, Finley said.

A Facebook post claimed that comparing the price of oil and gas in June 2008 to March 2022 shows that oil companies are "price gouging."

Experts said it takes time for gas prices to respond to drops in crude oil costs, and that’s not necessarily indicative of price gouging. The post’s numbers are cherry-picked; the difference in prices isn’t as great as it suggests.

RELATED: Ask PolitiFact: Why are gas prices going up?

RELATED: How much blame does Putin deserve for high gasoline prices?

Email interview with Nicole Petersen, a spokesperson for GasBuddy, March 15, 2022

Interview with Devin Gladden, a spokesperson for AAA, March 15, 2022