Footage of tractors towing away large weaponry has repeatedly circulated on social media since Russia invaded Ukraine. Tractors have emerged as an unlikely symbol of Ukraine’s resilience.

Certainly, farmers are among those hardest hit by Russia’s attack. Ukraine’s leaders have called on the agricultural sector to maintain food supply as crops and fields are threatened by bombings and missiles. So while these posts may have the effect of raising pro-Ukrainian morale, some of the images they share may deserve a more skeptical look as they haven’t been verified.

"Ukrainian farmers are slowly starting to build their own army," read a March 16 caption alongside a collage of five images showing Russian tanks, jets, and warships hitched onto tractors. 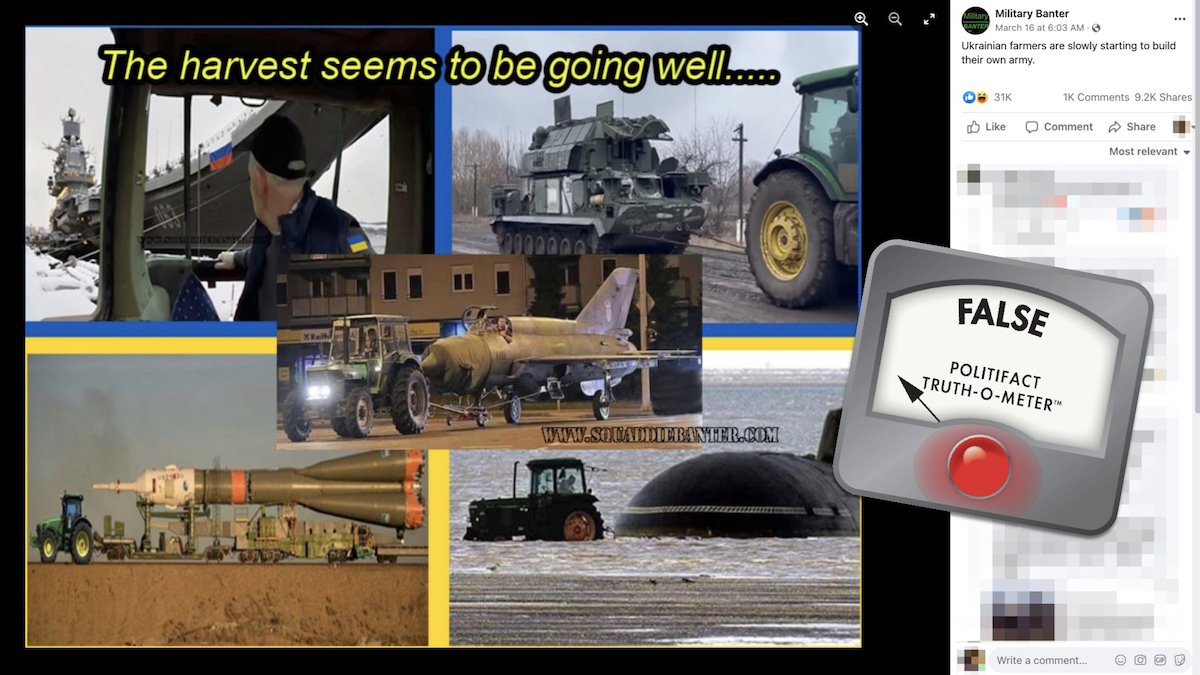 A reverse image search revealed that the user photoshopped the tractor against the backdrop of the Admiral Kuznetsov — a Russian aircraft carrier. The photo was published on the actual Sputnik News website on Oct. 30, 2018.

The second image, showing the farming vehicle towing a Russian tank, and the third image, depicting a rocket attached to a tractor, also appeared on the satirical Twitter account.

We couldn’t verify the authenticity of the photo showing the tank being towed, though it appears to be a screengrab from footage surfacing on tabloid sites and social media. A reverse image search on TinEye dated the image back to March 5.

PolitiFact found an earlier version of the third photo in Getty Images archives. That image depicted the Russian rocket in transit. According to the Getty caption, it was taken by photographer Bill Ingalls for NASA on Oct. 9, 2018, in Kazakhstan — without a green tractor attached and thousands of miles away from Ukraine.

The fourth picture in the Facebook post shows a tractor resting slightly above the water, supposedly pulling a Russian nuclear submarine. It was photographed in France on Sept. 21, 2004, and was digitally altered to include the tractor.

The central image in the collage depicted an aircraft hitched to a tractor.  It was taken during a celebration of Croatia’s military in 2011 and ran with a story published by 24sata.hr, a Croatian news outlet.

Only one of the images included in the compilation could not be verified. Still, none of them accurately reflect the enduring conflict in Ukraine or point to farmers in the country "slowly starting to build their own army." We rate this claim False.

Vice, The Tractor Has Become a Symbol of Ukrainian Resistance, March 16, 2022

Snopes, Is This Tractor Towing a Russian Jet Captured in Ukraine, March 16, 2022

Marco Rubio
stated on May 25, 2022 an interview on CNN:
“There hasn't been a single of these mass shootings that have been purchased at a gun show or on the internet.”

Facebook posts
stated on May 17, 2022 a Facebook post:
“Florida Highway Patrol has a semi-truck … The FHP uses a fleet of three such ‘hidden in plain sight’ trucks to snitch on bad drivers.”

Charlie Crist
stated on May 4, 2022 a press conference:
“It costs more to live in many Florida cities than New York City.”

Ron DeSantis
stated on April 29, 2022 a press conference:
“The student debt that is out there, almost 60% of it is graduate school debt.”

Charlie Crist
stated on April 12, 2022 an interview:
Says he has “always” believed “in a woman’s right to choose.”

Joe Biden
stated on April 11, 2022 a press conference:
“You couldn’t buy a cannon when, in fact, the Second Amendment passed."