Facebook posts
stated on May 5, 2022 in a Facebook post:
Amber Heard plagiarized lines from the movie “The Talented Mr. Ripley” in her opening statement during the Johnny Depp libel trial.

Actor Amber Heard testifies in the courtroom at the Fairfax County Circuit Court in Virginia on May 4, 2022. (AP)

Amber Heard’s testimony in the defamation trial initiated by ex-husband Johnny Depp launched a frenzy of news coverage as well as some false rumors.

One popular claim said Heard’s testimony borrowed heavily from a monologue in the 1999 movie "The Talented Mr. Ripley."

A viral tweet compared Heard’s alleged opening statement with lines from the movie, side by side: 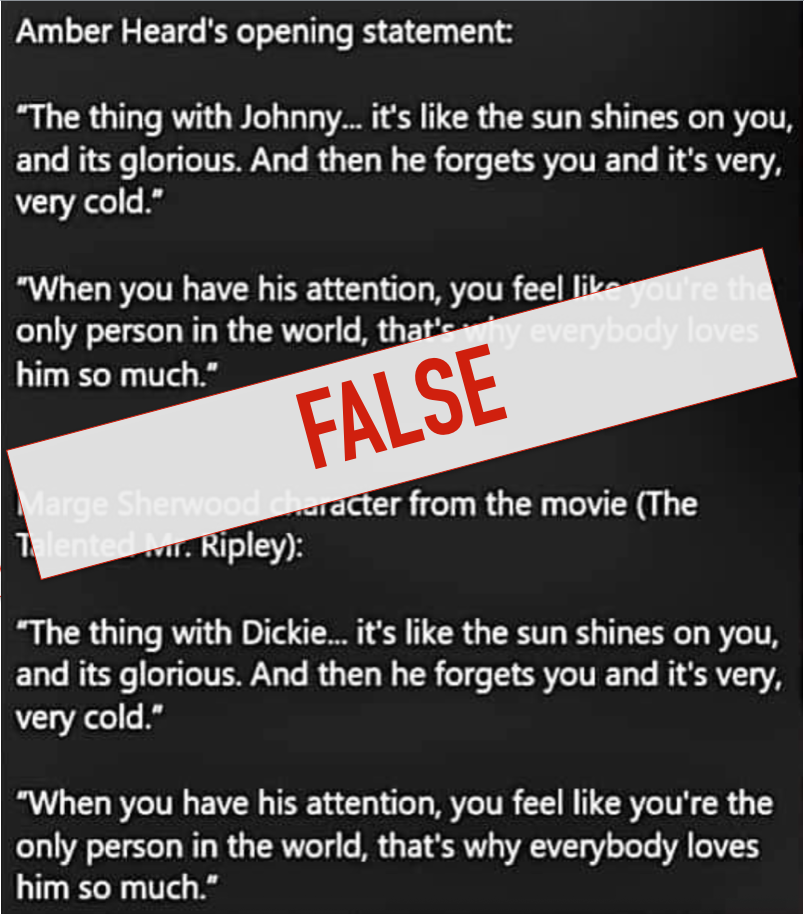 The claim spread widely on Facebook, where it was flagged as part of Facebook’s efforts to combat false news and misinformation on its News Feed. (Read more about our partnership with Facebook.)

While the post shows a real quote from the movie, Heard didn’t say these words.

The lines in the film are delivered by the character Marge Sherwood, played by Gwyneth Paltrow. They are as follows:

"The thing with Dickie ... it’s like the sun shines on you, and it’s glorious. And then he forgets you and it’s very, very cold ... When you have his attention, you feel like you’re the only person in the world, that’s why everybody loves him so much."

The social media claims about Heard substituted the name Johnny for Dickie.

But Heard didn’t say this, according to video evidence from the trial, news reports and official transcripts.

Instagram posts
stated on September 12, 2022 in a video
A CNN report on 9/11 proved that a plane never hit the Pentagon.

Fact-checkers from the Associated Press reviewed nearly seven hours of footage from the proceedings and also couldn’t locate the alleged quote. The rumor was similarly debunked by Newsweek and Snopes.

Shortly after taking the stand Heard answered some basic questions about her name, age and profession. She described how she met Depp and talked about their relationship.

Some social media users tried to compare parts of her testimony that used similar language as proof that she took lines from the movie, but the remarks contain significant differences.

For example, about 34 minutes into her testimony, Heard said that when she was around Johnny, she "felt like the most beautiful person in the world," and that he made her "feel seen" and feel like "a million dollars," and then he would "disappear."

This is not what Paltrow says in the movie.

Depp sued Heard for libel after she accused him of domestic abuse in a 2018 opinion editorial in the Washington Post. Depp’s lawyer described the allegations as "catastrophic" to Depp’s career.

Social media posts claim that Heard plagiarized lines from the movie "The Talented Mr. Ripley" during her testimony in the defamation trial brought by her ex-husband.

This is wrong. A fake transcript made it look like Heard repeated lines verbatim from the movie. Multiple reviews of the proceedings show that she did not make the comments attributed to her online.

Washington Post, Amber Heard: I spoke up against sexual violence — and faced our culture’s wrath. That has to change, Dec. 18, 2018