Some social media posts are sharing images of a person wearing a skirt and wrongly claiming that they show Salvador Ramos, the 18-year-old authorities have identified as the shooter at Robb Elementary in Uvalde County, Texas.

These photos were taken from the Reddit account of a person who identifies as a transgender girl.

These Facebook posts were flagged as part of Facebook’s efforts to combat false news and misinformation on its News Feed. (Read more about our partnership with Facebook.) 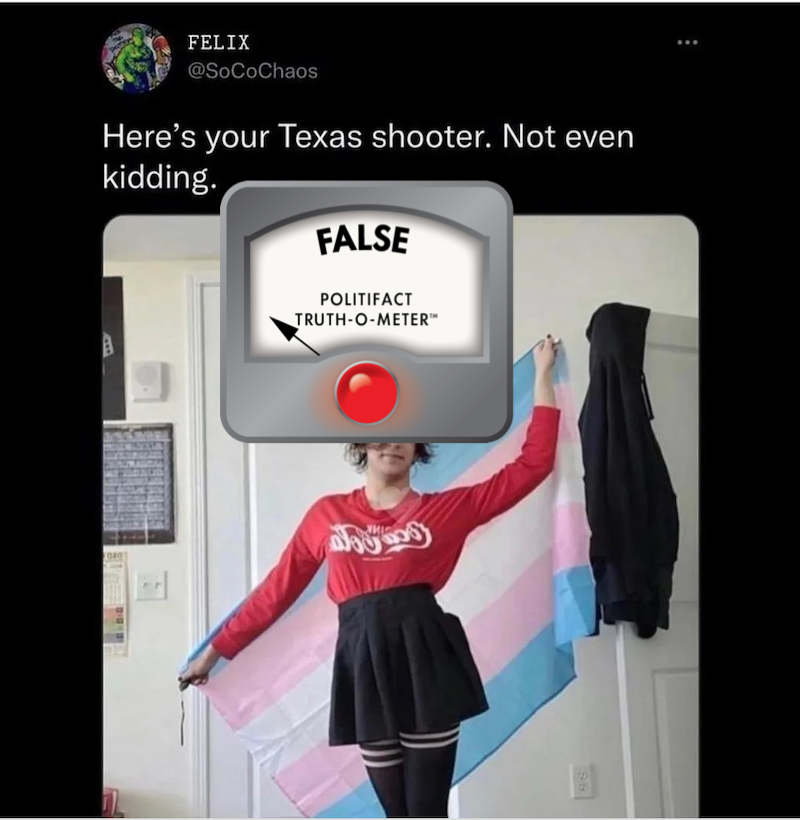 "It’s not me I don’t even live in Texas," the person wrote, posting a picture of themselves on Instagram on May 24. The account identifies the person as a "transgender girl" and says that her pronouns are she/her.
"Just checked… still not in TX and not a murderer," she said the next day, sharing another picture.
She posted similar pictures and messages on Reddit and responded to some commenters to clear her name:
"Not the murderer."
"The shooter is dead and I'm alive, I don’t live in Texas."
"They are my pics. People are using to make trans people look like murderers and blaming me for the shooting."
"I don’t want fame, I just want to live without being attacked when I leave my house."
We reached out to her on Reddit to talk about the spreading misinformation but did not immediately hear back. Mashable reporter Matt Binder tweeted that he spoke to her and, he wrote, she "wants the disinformation debunked and the posts falsely accusing them corrected."
Conservative journalist Andy Ngo urged people to stop sharing the photos on Twitter.
Christina Pushaw, press secretary for Florida Gov. Ron DeSantis, responded and said "and some of the pics of trans people they’re posting are obviously not Ramos."

We separately looked into claims that Ramos is transgender and found no evidence to corroborate them.

Claims that these photos of a transgender girl show Ramos are False.

PolitiFact, Fact-checking misinformation about the Uvalde, Texas school shooter, May 25, 2022

Viral image
stated on January 30, 2023 an Instagram post:
The government caused a fire at Hillandale Farms in Connecticut “so that they can force us into eating their fake GMO meats, or starve us into compliance.”

Viral image
stated on January 27, 2023 a Rumble post:
“Biden smirks while saying he has added more to the debt than any president before him.”