Facebook posts
stated on May 25, 2022 in a Facebook post:
CNN is recycling crisis actors in reports about a man dying in Afghanistan in 2021 and at the Uvalde, Texas, school shooting in 2022.

Attempts to discredit tragic events like mass shootings can come in many different forms. One popular tactic is claims about "crisis actors" — people who take part in a supposed conspiracy by pretending to be a victim of an event.

Sometimes, these posts target actual victims, like they did in the wake of the 2018 school shooting in Parkland, Florida. Other times, they drag in people who have nothing to do with the event.

This is what happened with one man’s image, which has been used multiple times to make false claims that CNN is recycling crisis actors in its coverage of major breaking news events.

His photo was used yet again in the wake of the May 24 Uvalde, Texas, elementary school shooting.

"See this guy died twice, once in Afghanistan in 2021 and then again yesterday at the fake elementary school shooting," one Facebook post said.

The user told people to "wake up" and said, "CNN is always sloppy and recycle the same crisis actors."

The post features side-by-side images of what it says shows a man named Bernie Gores. The image on the left shows a post from an individual (not CNN) claiming that he died protecting students in the Uvalde shooting.

The image on the right shows a screenshot of a bogus August 2021 tweet from "CNN Afghanistan," an account with the handle @CNNAfghan, announcing Gores was killed. 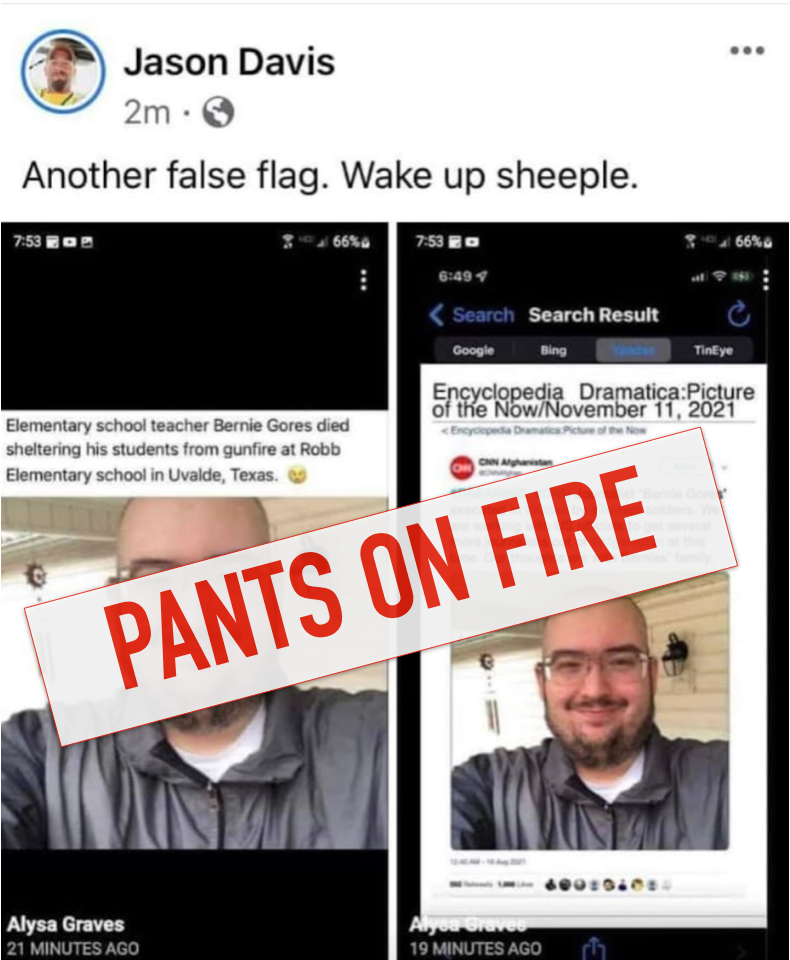 We debunked previous claims that CNN made this report — the @CNNAfghan Twitter account wasn’t authentic and has long been suspended. Posts using the same picture also falsely claimed that Gores was the first American casualty in Russia's invasion of Ukraine.

That, too, is wrong. The photo used in the fake tweets is of a video gamer named Jordie Jordan. In August, Reuters found that the image was of the YouTube gamer and podcaster. We conducted a reverse-image search that showed the photo on Wikitubia, a Wikipedia-type page for YouTubers, that identifies the person as Jordan.

The name Bernie Gores has appeared online since at least August 2020. Back then, the same photo of Jordan was featured as Bernie Gores, a person missing in Lebanon after a fuel explosion in Beirut. That was a hoax, and so is this.