Herschel Walker
stated on August 22, 2022 in a tweet:
Joe Biden and Raphael Warnock "are spending $1.5 billion on ‘urban forestry’ and raising taxes on those making under $200k to pay for it.”

• It is an exaggeration to say the bill will raise taxes on middle- and lower-income Americans. Analyses that reached that conclusion looked only at the tax provisions in the bill and not the spending provisions, which could offset those increases, or surpass them.

It began at Walker’s Aug. 21 campaign appearance, when he said of Democrats, "They continue to try to fool you that they are helping you out, but they’re not. Because a lot of money, it’s going to trees. Don’t we have enough trees around here?"

Herschel Walker on the federal climate change bill: “They continue to try to fool you that they are helping you out. But they’re not. Because a lot of money it’s going to trees. Don’t we have enough trees around here?” #gapol #gasen

The following day, Walker doubled down, saying in a tweet, "Yes, you heard me right … Joe Biden and @ReverendWarnock are spending $1.5 billion on ‘urban forestry’ and raising taxes on those making under $200k to pay for it. Yes, I have a problem with that."

Yes, you heard me right…Joe Biden and @ReverendWarnock are spending $1.5 billion on “urban forestry” and raising taxes on those making under $200k to pay for it. Yes, I have a problem with that.

He accurately represented the amount of money allocated to support urban tree cover in the Inflation Reduction Act. But his assertion that the effort is being funded by "raising taxes on those making under" $200,000 is misleading, since the analysis that drew that conclusion didn’t take into account the savings to Americans from other parts of the bill.

When PolitiFact contacted him for this article, Walker said through his campaign, "Our inner cities need less crime, not more trees."

It wasn’t long ago when a large majority of Republicans indicated they supported tree-planting efforts. A 2020 survey by the Pew Research Center found that 88% of Republicans supported planting about a trillion trees to absorb carbon emissions, which scientists say would help arrest climate change.

Also in 2020, President Donald Trump noted in his State of the Union address that he had worked to make sure the U.S. joined the World Economic Forum’s One Trillion Trees planting initiative. And House Minority Leader Kevin McCarthy, R-Calif., co-sponsored the One Trillion Trees Act along with 33 other House Republicans. (It did not advance.)

More recently, though, Republicans and GOP-aligned groups have used trees as a rhetorical punching bag.

In August, the group Citizens Against Government Waste ran a Facebook ad that ridiculed spending in the Inflation Reduction Act on such "wasteful" efforts as "‘tree equity,’ ‘clean’ garbage trucks and studying cow farts."

How much will be spent on trees under the new law?

The new law allocates $1.5 billion to the U.S. Forest Service’s Urban and Community Forestry program, which averages to $150 million a year over the bill's 10-year life.

That’s a substantial cash infusion for the program, which has been funded at around $30 million to $40 million per year for the past few years, said Matt Spitsen, program development manager for the Arbor Day Foundation, which promotes tree planting.

Where does funding for the law come from?

Walker said the legislation would raise "taxes on those making under $200k." But the tax provisions in the measure are aimed at wealthy money managers and big companies.

One of the law’s two major tax elements would significantly scale back a tax-code provision known as "carried interest," which allows money managers to pay taxes on much of their income at capital-gains rates, which are lower than the regular rates for personal income.

The other provision would require companies reporting at least $1 billion in profits to pay at least 15% in corporate income taxes, which many currently do not do.

An analysis by the congressional bipartisan Joint Committee on Taxation found the law would raise taxes, on average, in every income bracket. Overall, the federal tax burden for all Americans would rise by an average of 1.4% in 2023, and by less in future years. For those earning between $30,000 and $100,000, the increase would be less than 1% in 2023.

But there’s an important caveat: The joint committee analysis looked only at the tax side of the bill, not at spending provisions that could offset those tax increases for most families. The latter includes tax credits for people who buy electric vehicles and implement energy-efficiency improvements; multiyear subsidies for health insurance under the Affordable Care Act; and a drug-negotiation provision for Medicare.

The Committee for a Responsible Federal Budget concluded that the $64 billion in health insurance subsidies alone "would be more than enough" to erase the tax increases for people earning less than $400,000 under the Joint Commission on Taxation’s analysis.

What will the allocation for trees be spent on?

The funding for trees is to be used "for tree planting and related activities, with a priority for projects that benefit underserved populations and areas," according to the bill.

Before the bill’s passage, the U.S. Forest Service program’s budget was spent largely on placing staff in every state to support local urban foresters. The new, expanded budget will allow the program to award grants to local nonprofits seeking to improve tree cover in their geographic areas, Spitsen said.

The idea is to "help cities plant more trees in the places where they're needed most," said Jad Daley, president and CEO of the advocacy group American Forests.

The national program’s focus on racial and economic justice seeks to direct the bill’s funding to neighborhoods that are low-income and relatively treeless.

"Essentially, shade and cooling is distributed according to race and income," he said. 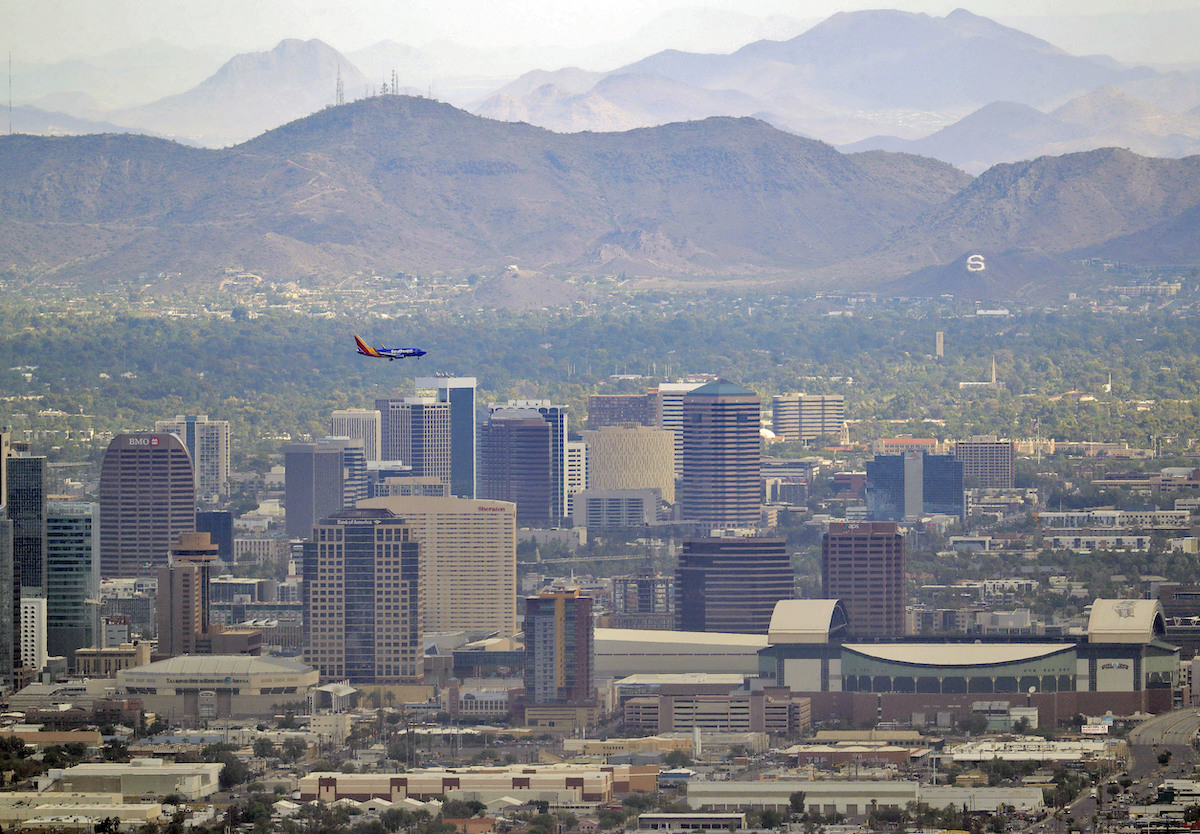 A jet comes in for approach over downtown Phoenix as temperatures exceed 100 degrees in the morning hours. Phoenix officials are planting thousands of trees to lower temperatures. (AP)

Why is the money being allocated?

One major benefit is reducing mortality from heat. Between 1999 and 2010, 8,081 people died in the United States from heat-related deaths, according to the Centers for Disease Control and Prevention. About three-quarters of those deaths were primarily because of heat, and in the rest, heat was a contributing factor.

More recent data from a University of Pennsylvania study found even higher numbers for heat-related deaths: an estimated 13,000 to 20,000 between 2008 and 2017.

"The allocation of funds to tree planting in cities can have an immense impact on heat risk," said Brian Stone Jr., an urban environmental planning and design professor at Georgia Institute of Technology.

Stone said his research found that in combination with other strategies, planting trees in Atlanta "can reduce heat-wave mortality by more than 20%."

Trees also ease carbon levels in the atmosphere. Trees, like all plants, store and immobilize carbon dioxide, which is a key driver of climate change.

Daley said it’s estimated that 130 million metric tons per year of carbon dioxide are being stored in trees and forests. "So it's a really big slice of the natural climate solution," he said. Tree-planting is "a meaningful contribution to actually pull carbon dioxide out of the air."

Finally, trees help save money on cooling. Research published by the U.S. Forest Service suggests that, on average, urban trees and forests help decrease residential electricity use by 7.2% annually. That produces savings in utility costs and also reduces emissions from power generation.

Walker said, Biden and Warnock "are spending $1.5 billion on ‘urban forestry’ and raising taxes on those making under $200k to pay for it."

Walker is correct about the amount being spent on efforts to bolster urban tree cover, but he exaggerated when he said the bill will "raise taxes" on middle- and lower-income Americans.

Analyses that reached that conclusion looked only at the tax provisions in the bill. The spending provisions could offset those increases, or surpass them, by saving Americans money on green improvements, Affordable Care Act premiums and prescription drug costs.

Text of the Inflation Reduction Act

CBS News, "Here's how Phoenix is cooling down its streets as summers get hotter," July 22, 2022

Statement to PolitiFact from the Herschel Walker campaign, Aug. 25, 2022

Julie Gunnigle
stated on September 15, 2022 a debate:
"If Arizona were a country, it’d be the eighth largest incarcerator in the world."