Instagram posts
stated on January 1, 2023 in an image shared on Instagram:
“All ‘gender affirming care’ for children is 100% experimental. There are zero long term studies on the effects the drugs and surgeries will have on them.”

LGBTQ advocates including health care professionals, parents of transgender children and representatives from several organizations rally at the Texas State Capitol May 4, 2021, opposing legislation that would criminalize gender-affirming care. (AP/HRC)

The word "experimental" can trigger fear of the unknown and may suggest unforeseeable consequences or complications.

Lawmakers aiming to restrict access to gender-affirming care have embraced the term, arguing that their proposals will protect children from such "experimental" treatments.

"All ‘gender affirming care’ for children is 100% experimental," read the Instagram post featuring a screenshot of a tweet. "There are zero long term studies on the effects the drugs and surgeries will have on them." 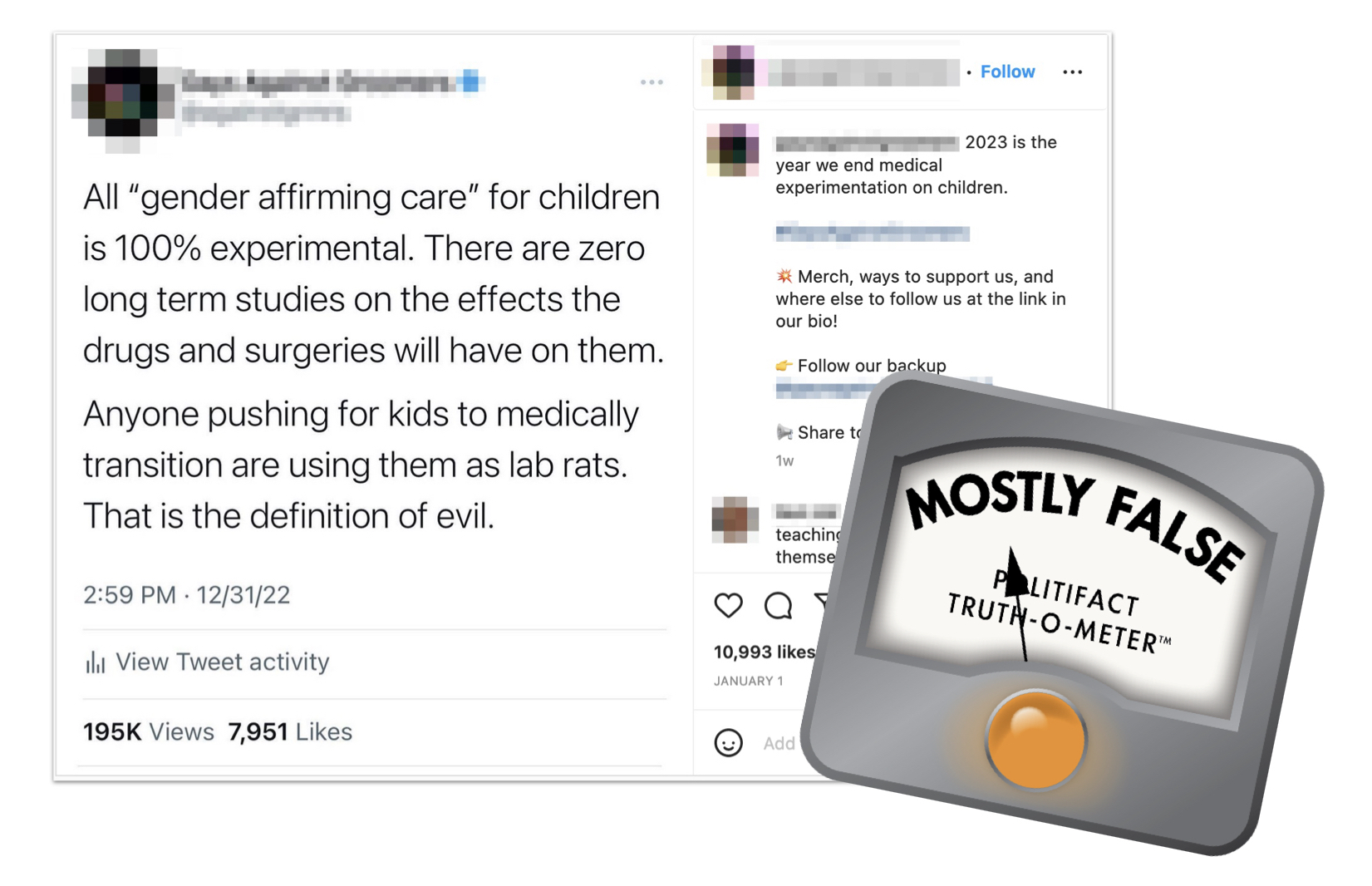 Gender-affirming care is an individualized approach to health care that centers, encourages and supports a person’s gender identity, experts said.

The World Professional Association for Transgender Health’s standards of care noted that gender-affirming care is more than just transition-related medical treatments such as hormone therapy or surgical procedures.

Gender-affirming care for children might include allowing a child to wear whatever clothes they like or encouraging the use of the name and pronouns that align with the child’s gender identity, said Dr. Michelle Forcier, a pediatrics professor who specializes in gender and sexual and reproductive health at The Warren Alpert Medical School of Brown University.

Those types of emotional and social affirmation — which also include creating a safe space to explore gender identity — are important elements of pediatric gender-affirming care, said Dr. Jason Rafferty, a pediatrician and child psychiatrist at Hasbro Children’s Hospital in Providence, Rhode Island.

Forcier and Rafferty emphasized that gender-affirming care for children is based on individual needs and goals. Social support is the only type of gender-affirming care recommended for children before puberty, said Shane Diamond, a World Professional Association for Transgender Health spokesperson. As children reach adolescence, medical treatments might become part of their care.

Dr. Renata Arrington-Sanders, an adolescent and young adult medicine associate professor at Johns Hopkins University School of Medicine, said there is "an extensive body of evidence-based, peer reviewed research on gender-affirming care" that informs current standards set by organizations, including the Endocrine Society, the American Academy of Pediatrics, and the World Professional Association for Transgender Health.

Puberty blockers have been studied, used for decades

Puberty-blocking medication might be an element of gender-affirming care for children who reach puberty and experience gender dysphoria — a feeling of distress when their bodies don’t align with their gender identity.

Puberty blockers "help delay unwanted physical changes that don’t match someone’s gender identity," according to St. Louis Children’s Hospital. They were first used in the U.S. for gender-affirming care in 2007, Rafferty said. But they have been prescribed in Europe at least since the mid-1990s to treat adolescents with persistent gender dysphoria.

The medication gives children time to explore their identities and consider additional treatment options. Research, including a 22-year follow-up study, shows that medication helps alleviate psychological distress in adolescence and supports a child’s development into adulthood.

Puberty blockers contain gonadotropin-releasing hormone (GnRH) analogs, which suppress the body’s release of sex hormones such as estrogen and testosterone.

Although puberty blockers weren't designed for gender-affirming care, their use for this purpose has been studied and isn't considered "experimental" by experts.

"‘Experimental’ in this context is a political term designed to create drama, confusion, and terror," said Forcier. "Medical care is always being evaluated and studied so we can provide the best care."

Every medication has side effects, Arrington-Sanders said, but doctors monitor the side effects of medications used to suppress puberty.

Studies demonstrate the long-term efficacy and positive impacts that gender-affirming care such as puberty blockers has on transgender youth, said C.P. Hoffman, senior policy counsel at the National Center for Transgender Equality. Hoffman pointed to a gender dysphoria research overview by doctors and researchers at the Yale School of Medicine, the University of Alabama at Birmingham, Children’s Medical Center Dallas and other institutions.

The researchers noted that studies in 2015 and 2022 found that puberty blockers helped young people with gender dysphoria. 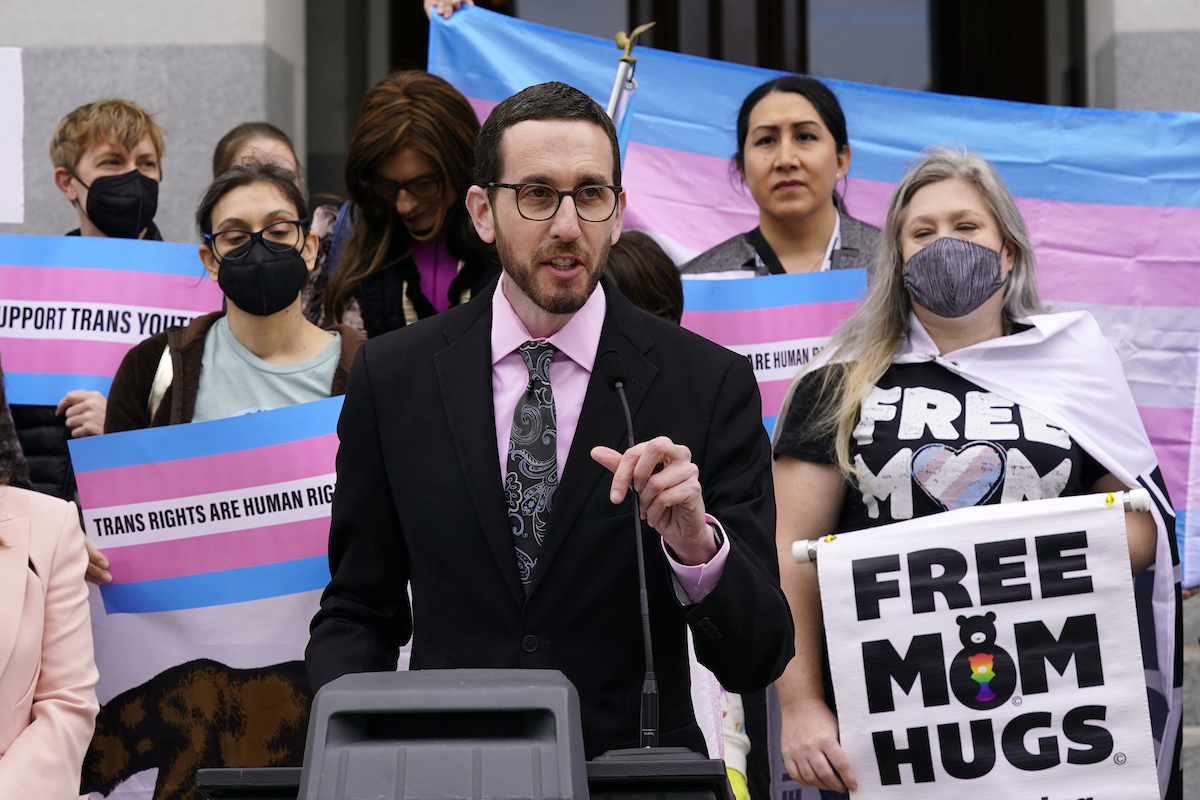 Feminizing or masculinizing hormone therapies might be another element of gender-affirming care that may be recommended when a patient is capable of giving informed consent —  around age 16, according to the Endocrine Society.

Like puberty blockers, gender-affirming hormone therapy medications aren’t approved specifically for gender affirmation use, and instead are approved and commonly used for contraception, managing menopause, for male pattern baldness and more.

But the hormones themselves are "considered safe (and) effective, especially when medically monitored," said Forcier of Brown University.

Gender-affirming surgeries are typically recommended for and provided to adults.

Certain gender-affirming surgeries, such as masculinizing chest surgery, are sometimes provided to teenagers, though this is rare. There is not much research on the long-term impact they have on adolescents, Rafferty said.

Some things about gender-affirming care, such as how it affects fertility, are still being researched. But experts said this is the nature of medicine and pediatrics.

Rafferty said, "When most people hear ‘experimental’ they feel it means that providers do not know what they are doing or (are) guessing when making clinical decisions." But additional studies and research happen routinely to learn more about a topic and to develop better practices and standards of care.

An Instagram post claimed, "All ‘gender affirming care’ for children is 100% experimental. There are zero long term studies on the effects the drugs and surgeries will have on them."

Experts said it is inaccurate to call all gender-affirming care for children "experimental," because the approach, including the use of puberty blockers, is evidence-based. Research also shows that gender-affirming care reduces the risk of suicide, anxiety, depression and gender dysphoria.

There’s an element of truth to the claim: There aren’t many long-term studies on the effects of gender-affirming surgeries for youth, but that’s because they aren’t done on children and rarely on teenagers.

RELATED: Transition-related surgery limited to teens, not 'young kids.' Even then, it's rare

The Texas Tribune, What is gender-affirming medical care for transgender children? Here’s what you need to know, Aug. 4, 2021

Association of American Medical Colleges, What is gender-affirming care? Your questions answered, April 12, 2022

Them, Everything you need to know about feminizing hormone therapy, Aug. 16, 2022

SpringerLink, Pubertal delay as an aid in diagnosis and treatment of a transsexual adolescent, June 8, 1998

Email interview with Dr. Michelle Forcier, a professor of pediatrics at The Warren Alpert Medical School of Brown University, Jan. 6, 2023

Emailed statement from R.J. Mills, a spokesperson with the American Medical Association, Jan. 9, 2023

Email exchange with Dr. Jennifer Evans, a clinical psychologist at the University of Florida, Jan. 6, 2023

Email interview with Shane Diamond, a spokesperson for the World Professional Association for Transgender Health, Jan. 9, 2023

Healthline, Everything you need to know about gender affirming care, May 27, 2022

American Medical Association, What to know about gender-affirming care for younger patients, Dec. 21, 2021

What We Know Project at Cornell University, What does the scholarly research say about the effect of gender transition on transgender well-being? accessed Jan. 10, 2023

National Library of Medicine, Ten common questions (and their answers) about off-label drug use, published October 2012

The Association for Child and Adolescent Mental Health, Review: Puberty blockers for transgender and gender diverse youth—a critical review of the literature, Dec. 15, 2020

National Library of Medicine, Trends in the "off-label" use of GnRH agonists among pediatric patients in the United States, published October 2018

The Lancet Diabetes and Endocrinology, Puberty suppression in transgender children and adolescents, May 22, 2017

Healthline, Are puberty blockers reversible? What you should know before treatment, Nov. 9, 2022

The Lancet Child and Adolescent Health, Continuation of gender-affirming hormones in transgender people starting puberty suppression in adolescence: a cohort study in the Netherlands, Oct. 20, 2022

PLOS ONE, Access to gender-affirming hormones during adolescence and mental health outcomes among transgender adults, Jan. 12, 2022

Journal of Adolescent Health, Association of gender-affirming hormone therapy with depression, thoughts of suicide, and attempted suicide among transgender and nonbinary youth, Dec. 14, 2021

Politico, The transgender care that states are banning, explained, March 25, 2022

Frontiers in Endocrinology, Short-term effects of gender-affirming hormone therapy on dysphoria and quality of life in transgender individuals: A prospective controlled study, July 29, 2021

PBS NewsHour, What medical treatments do transgender youth get? April 22, 2022