Microsoft Corp. co-founder and philanthropist Bill Gates is a well-known proponent of vaccine research and development. But did he once tweet that vaccines should be added to the food supply?

"Vaccines in our food supply solves the problem of vaccine hesitancy," reads what looks like a screenshot of a tweet attributed to Gates and shared on Facebook. People shared the image alongside a photo of comedian and actor Bill Cosby, and drew a nefarious parallel between Gates’ alleged action and date rape. Other versions displayed the tweet with a photo of Gates smiling next to a batch of test tubes. 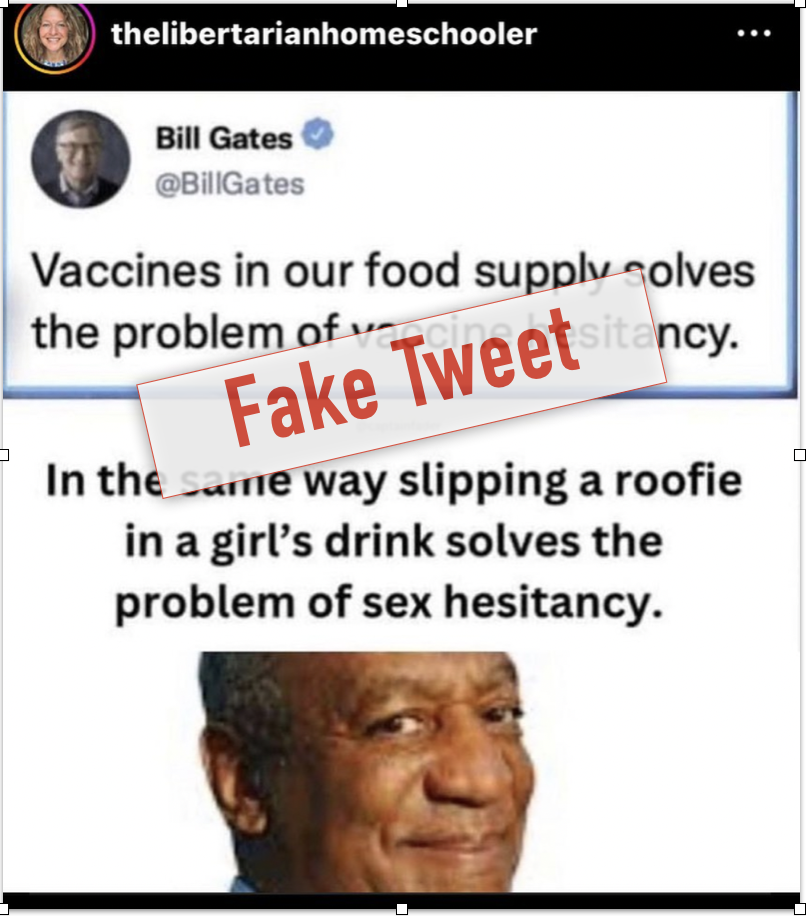 (Screenshot from Instagram)
But Gates never wrote this. The tweet was fabricated.
The posts were flagged as part of Facebook’s efforts to combat false news and misinformation on its News Feed. (Read more about our partnership with Meta, which owns Facebook and Instagram.
We couldn't find the tweet on Gates’ Twitter feed or on Polititweet, a website that maintains a database of deleted tweets by public figures.
PolitiFact reached out to the Bill & Melinda Gates Foundation but didn’t hear back.
The screenshot appears to come from a Jan. 10 story by NewsPunch, a website known for spreading misinformation, about Gates supposedly trying to force mRNA vaccines on people by pumping them into the food supply. The story featured a photo illustration that included an image of the fabricated tweet.
But the story revolves around comments Gates made in 2018 — before the COVID-19 pandemic — about vaccinating livestock.
In the video, Gates spoke about a partnership between his foundation and a United Kingdom agency then known as the Department for International Development, which is now part of the Foreign, Commonwealth and Development Office.
"The Gates Foundation has partnered with DFID on a great number of things and, among those, are work we do together on livestock," Gates said in the clip. "Helping animals survive either by having vaccines or better genetics, helping them be more productive. It’s making a big difference."
Gates didn’t say anything about forcing vaccines on people by using the food supply.
The tactic also wouldn't work. The mRNA COVID-19 vaccines aren’t approved for animals and, even if they were, eating food products from a vaccinated animal wouldn’t transfer the vaccine to people.
Our ruling

TikTok posts
stated on January 19, 2023 in a TikTok post
“Chickens aren’t laying eggs because RNA is being added to commercial chicken feed.”

The tweet was fabricated and came from a photo illustration that NewsPunch used in a story about comments Gates made in 2018. In that talk, he said nothing about using food to force vaccinations on people.

RELATED: No, mRNA vaccines aren’t widely used in livestock and can’t get into the food supply