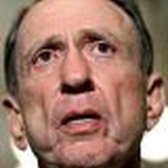 Arlen Specter is a former U.S. senator from Pennsylvania. He was initially elected to the Senate in 1980 as a Republican and was elected another four times on the Republican banner, even serving for a time as chairman of the Senate Judiciary Committee, before switching parties in 2009 to become a Democrat. He was denied the Democratic U.S. Senate nomination in 2010, losing in the primary to Rep. Joe Sestak, and retired in 2011.