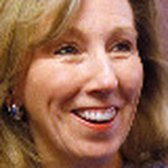 Barbara Comstock, a Republican, has represented Virginia's 8th Congressional District in the U.S. House of Representatives since 2015. She represented Fairfax County in Virginia's House of Delegates from 2010 to 2014. Prior to that, Comstock held various staff positions on Capitol Hill. She did opposition research for the Republican National Commiittee, was a staffer on George W. Bush's 2000 presidential campaign and  a consultant in Mitt Romney's 2012 presidential campaign. She is founding partner and co-principal of Corallo Comstock, a public relations and public policy firm. Comstock was born in Springfield, Mass. She is a graduate of Middlebury College and Georgetown University Law Center.