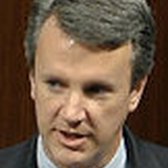 U.S. Rep. Ben Cline is a Republican from Virginia's 6th Congressional District extending from Roanoke through Lynchburg and the Shenandoah Valley. He was elected in 2018, succeeding longtime Republican Bob Goodlatte, who did not seek reelection. Cline was born in Stillwater, Ok. and reared in Rockbridge County, Va. He is a graduate of Bates College and the University of Richmond School of Law. Cline was an assistant Commonwealth's Attorney for Rockingham County and Harrisonburg Virginia from 2007-2013, and then entered private law practice. He served in the Virginia House of Delegates from 2002-2018.