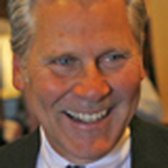 Bill Clegg, a lawyer, is a former executive director for ethics and compliance at Textron. He is also a a former member of the board of directors of the Rhode Island Airport Corporation and a current member of the Rhode Island Commission on Judicial Tenure and Discipline. He ran for Congress in the 2nd District in 2010. Born in 1955, he graduated from the University of Rhode Island and the Syracuse University College of Law. Clegg was also a colonel in the U.S. Army Reserve and served in Iraq in 2004. He is married and the father of two.