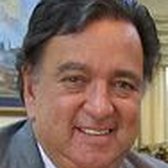 Bill Richardson is the former governor of New Mexico, having served two terms in that position from 2003-2011. Richardson is also a former congressman, U.S. secretary of energy, and ambassador to the United Nations. He unsuccessfully sought the Democratic nomination for president in 2008, and was President Barack Obama’s initial nominee for secretary of commerce in 2009.