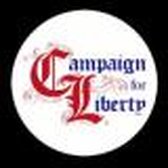 The Campaign for Liberty is a non-profit political organization by former U.S. Rep. Ron Paul, R-Texas, in the aftermath of his 2008 presidential campaign. The group, which claims 500,000 members, is dedicated to electing candidates who share its beliefs for limited government, a non-interventionist foreign policy and opposition to the Federal Reserve System.