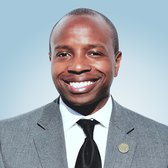 In 2016, Johnson ran for 2nd District Alderman on the Milwaukee Common Council, winning a five-way primary with 38 percent of the vote and winning the general election with 4,307 votes (52 percent).  Johnson was re-elected without opposition in 2020 and was also elected by his peers in a 8–7 vote to serve as the Milwaukee Common Council president.   Johnson became acting mayor of Milwaukee upon the resignation of  Tom Barrett to assume the ambassadorship of Luxembourg, on December 22, 2021. He is acting mayor until the 2022 Milwaukee mayoral special election. The Milwaukee mayor's office is non-partisan. Johnson is a candidate in the special election. The day before assuming the role, Johnson announced his top priority would be combating reckless driving to create safe streets.