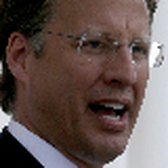 Dave Brat represents Virginia's 7th Congressional District in the U.S. House of Representatives. He was first elected to the seat in 2014 after pulling of a stunning upset of Majority Leader Eric Cantor in a Republican Primary. He is active in the Freedom Caucus, a conservative wing of Republican congressmen. Prior to Congress, Brat was chairman of the business and economics department at Randolph-Macon College.  Brat, a midwestern native, has obtained a Masters in Divinity from Princeton Theological Seminary and a Ph.D. in economics from American University. He began teaching at Randolph-Macon in 1996. Brat served two Governors on the Joint Advisory Board of Economists. He was president of the Virginia Association of Economists.