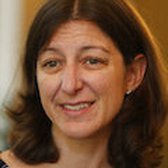 Democrat Elaine Luria represents Virginia's 3rd Congressional District, anchored in Virginia Beach. She was first elected to Congress in 2018, defeating Republican incumbent Scott Taylor. Luria was born and reared in Alabama. She graduated from the U.S. Naval Academy in 1997 with a double major in physics and history. She earned an MS in engineering management from Old Dominion University in 2004. Luria was a Navy officer for 20 years, spending her entire career aboard battle ships running nuclear reactors as an engineer. She retired from the Navy in 2017 as a commander.