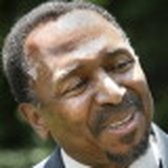 Earl Walker Jackson Sr. was the 2013 Republican nominee for lieutenant governor of Virginia. He lost to Democrat Ralph Northam. Jackson was previously an unsuccessful candidate for the Republican nod in the 2012 U.S. Senate race. Jackson served in the U.S. Marine Corps for three years. He graudated from the University of Massachusetts Boston in 1975 and earned a law degree from Harvard Law School, Cambridge, Mass., in 1978. He practiced law in the Boston area for 15 years.  In 1996, Jackson joined with the Christian Coalition to head "The Samaritan Project," an outreach program that distributed $500,000 to churches that were victim of arson. In 1998, he was consecrated a bishop and went on to establish Exodus Faith Ministries, a nondenominational church in Chesapeake.