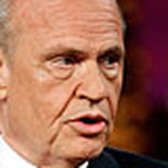 Fred Thompson was a U.S. senator from Tennessee from 1994 to 2003. He graduated from Memphis State University and earned a law degree at Vanderbilt University. Thompson practiced law and served a variety of government counsel positions, including as minority counsel for the Senate Select Committee on Presidential Campaign Activities ("Watergate Committee"). In his acting career Thompson has appeared in 18 films, and recently worked as a TV actor, playing a prosecutor on the series Law and Order. Thompson was born in Alabama in 1942. He has been married to Jeri Kehn since 2002, and has four children, two from his first marriage. He withdrew from the presidential race on Jan. 22, 2008.