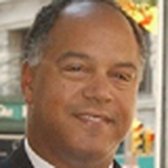 Gary George, a Democrat, represented Milwaukee in the Wisconsin Senate and was co-chair of the influential Joint Finance Committee. He is a former candidate for governor. In 2003, he was recalled from office as a state senator and convicted a year later of a felony count of conspiring to defraud the government for his role in a $270,000 kickback scheme. In 2014 he re-entered politics and was an unsuccessful candidate in the Aug. 12, 2014 Democratic primary for the 4th Congressional seat held by Rep. Gwen Moore.