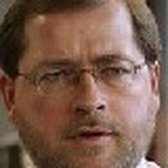 Grover Norquist is president of Americans for Tax Reform, a group he founded in 1985 to advocate for a tax system in which taxes are simpler, flatter, more visible, and lower than they are today. Its flagship program is the Taxpayer Protection Pledge, which it began promoting in 1986 and expanded to the state level in 1990. Those who sign on to the pledge commit to oppose any effort to increase income taxes on individuals or businesses. Norquist also serves on the board of directors of the National Rifle Association of America, the American Conservative Union and The Nixon Center.