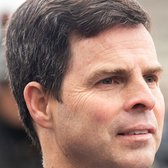 Del. John McGuire, R-Goochland County, was first elected to the Virginia House of Delegates in 2017. He is a former Navy Seal and founded a physical training business. In 2020, McGuire unsuccessfully sought the Republican nomination for Virginia's 7th District congressional seat. He faced criticism for attending the Jan.. 6, 2021 rally for President Donald Trump in Washington. McGuire, however, said he did not enter the U.S. Capitol during the uprising.