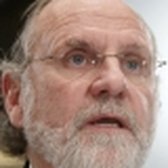 Jon Corzine started at Goldman Sachs in the mid-70s and climbed his way up the investment firm, being named chairman and CEO in 1994. He would go on to become a U.S. senator and then governor of New Jersey. In 2009, Corzine lost his gubernatorial reelection bid to Chris Christie. He returned to finance, joining MF Global as chairman and CEO. The firm went bankrupt in the fall of 2011. During the firm's collapse, $1.2 billion in client money went missing.