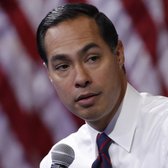 Julián Castro is a former U.S. secretary of Housing & Urban Development. He was the youngest member of Barack Obama’s cabinet, serving from 2014 to 2017. Just before he became secretary of HUD, he was the mayor of San Antonio, elected in 2009. Castro received a bachelor’s degree in political science and communications from Stanford University and a J.D. from Harvard Law School. In 2019, he announced he was running for the Democratic nomination for president and dropped out on Jan. 2, 2020.