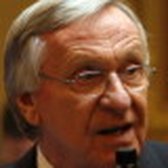 Kenneth R. Plum, D-36th, has been a member of the Virginia House of Delegates since 1982 and served earlier from 1978 to 1980. His district contains a large part of Fairfax County, including Reston. Plum is a mamber of the Rules, Science and Technology, and Agriculture, Chesapeake and Natural Resources committees. Plum has been the House Democratic Caucus chairman and the Democratic Party of Virginia chairman. He was born in Shenandoah. Plum received a bachelor's degree from Old Dominion University, Norfolk, and a master's of education from the University of Virginia. He worked for almost three decades as a teacher, school administrator and director of adult and community education at Fairfax County Public Schools.