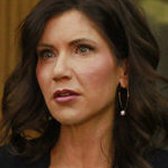 Governor Kristi Noem is a wife, a mother, and a lifelong rancher, farmer and small business owner. In 2010, after serving in the South Dakota legislature for several years, Noem was elected to serve as South Dakota's lone member of the U.S. House of Representatives. During her time in Congress, in addition to many other successes, Governor Noem helped pass the Tax Cuts and Jobs Act, which put $2,400 back in the pockets of the average South Dakota family. In 2018, with the platform of protecting South Dakotans against tax increases, government growth, federal intrusion, and government secrecy, she was elected as South Dakota's first-ever female Governor.