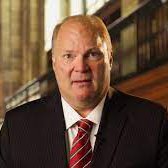 Michael J. Gableman a lawyer  and former justice of the Wisconsin Supreme Court. ]A Republican, Gableman has been called a "hard-line conservative." During a November 7, 2020 speech at a Trump rally in Milwaukee four days after the election, Gableman said "I don't think anyone here can think of anything more systematically unjust than a stolen election." In 2021, Wisconsin state assembly speaker Robin Vos tasked Gableman with conducting his review of the 2020 U.S. presidential election in Wisconsin.