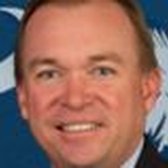 In December 2018, President Donald Trump named Mick Mulvaney as his acting chief of staff. In 2017, Trump nominated Mulvaney to direct the Office of Management and Budget, and he was confirmed shortly after. Before, he served as the new U.S. Congressman for South Carolina's 5th District from 2010-2017. Mulvaney grew up in the Carolinas and went to Georgetown University. He attended law school at the University of North Carolina at Chapel Hill and later did additional course work at Harvard Business School. His professional background includes law and real estate.