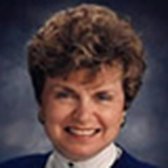 Nancy Nusbaum served as the mayor of De Pere, Wis., and as the county executive of Brown County, the home of Green Bay. She twice ran unsuccessfully for Congress -- once as a Democrat and once as a Republican. In 2011, as a Democrat, she unsuccessfully challenged state Sen. Robert Cowles, R-Allouez, in a recall election.