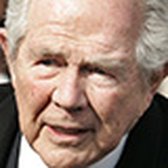 Marion Gordon (Pat) Robertson is a conservative Christian businessman, broadcaster, educator and former Southern Baptist minister. He is chairman of the Christian Broadcast Network and CEO of Regent University in Virginia Beach, Va. He was born in 1930 in Lexington, Va., the son of Willis Robertson, a long-serving U.S. senator. He received a B.A. in history from Washington & Lee University and a law degree from Yale University. Robertson founded CBN in 1960 and became host of The 700 Club, a Christian news broadcast. He founded CBN University in 1977 and it was reneamed Regent University in 1989. In 1988, he unsuccessfully sought the Republican nomination for president.