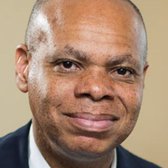 Patrick Gaspard is president and CEO of the Center for American Progress, a liberal think tank. Under President Barack Obama, Gaspard served as U.S. ambassador to South Africa, as executive director of the Democratic National Committee, and as assistant to the president and director of the White House Office of Political Affairs.