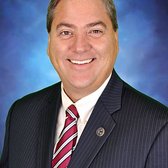 Paul Farrow is a Wisconsin politician and legislator. Farrow graduated from the Waukesha County Technical College and Carroll University. He was elected to the Wisconsin Assembly in 2010. He was elected to the Wisconsin State Senate in December 2012 to fill the vacancy of Senator Rich Zipperer, who resigned to take a job with the Governor's office. He is the owner of a home inspection business. His mother is former Wisconsin Lieutenant Governor Margaret Farrow. On April 7, 2015, he was elected  Waukesha County executive.