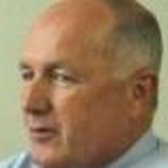 Pete Hoekstra is a former congressman and was the ranking Republican on the House Intelligence Committee. He did not seek re-election in 2010, choosing instead to pursue the Republican gubernatorial nomination in Michigan that year, finishing second to now-Gov. Rick Snyder. During the 2012 campaign cycle, he is seeking to unseat incumbent Democratic Sen. Debbie Stabenow.