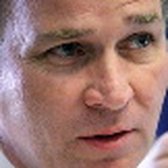 Randy Forbes is from Chesapeake and represents Virginia's Fourth District in Congress. He was first elected to the House of Representatives in 2001. He serves on the Judiciary Committee and the Armed Services Committee, where he is chairman of the Seapower and Projection Forces Subcommittee. Forbes previously served in Virginia's House of Delegates from 1989 to 1997 and in the State Senate from 1997 to 2001. He also was chairman of the Republican Party of Virginia from 1996 to 2001. Forbes received a bachelor's degree from Randolph-Macon College, Ashland, in 1974, and a law degree from the University of Virginia, Charlottesville, in 1977.