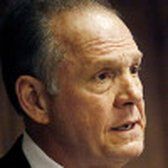 Roy Moore is a lawyer, judge, activist and Republican politician from Alabama. Moore ran unsuccessfully for U.S. Senate in 2017. He served as judge of the Sixteenth Judicial Court of Alabama from 1992 until he was elected Chief Justice of the Alabama Supreme Court in 2000. He was removed from his position in 2003 for refusing to remove a Ten Commandments monument he installed in the Alabama Judicial Building. He then served as president of the Foundation for Moral Law, a Christian activist group, until 2012 when he was once again elected Chief Justice.