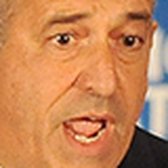 Russ Feingold served as a Democratic U.S. Senator representing Wisconsin from 1992 until 2010, when he was defeated for re-election. An attorney, he previously served 10 years in the Wisconsin Legislature. Following his Senate defeat, he founded Progressives United, which says it mission is to "stand up to the exploding corporate influence in our political system by organizing and amplifying the voices of those who believe that corporations have too much power." Feingold is running against U.S. Sen. Ron Johnson, the man who defeated him, in the 2016 election.