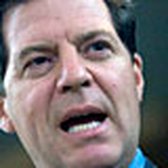 Sam Brownback is a U.S. senator from Kansas, elected to that job in 1996. He previously served one term in the U.S. House and also was the state agriculture commissioner. He graduated from Kansas State University and earned a law degree from the University of Kansas. He was born in Garnett, Kan., in 1956. He and his wife, Mary, have five children. He withdrew from the presidential race on Oct. 19, 2007.