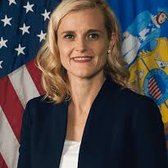 Treasurer Sarah Godlewski is Wisconsin’s thirty-sixth State Treasurer and serves as the state’s chief financial officer. Godlewski is a candidate for U.S. Senate.   Prior to serving, she was the co-founder of a multimillion dollar socially responsible investment firm called MaSa Partners that invests in early-stage businesses. The Treasurer was also a founding member of WE Capital Fund which empowers female entrepreneurs through financing opportunities. Her work has been nationally recognized for achieving positive impact without sacrificing sound financial returns.    Beyond investing, Godlewski worked at the Pentagon for almost a decade where she helped save taxpayers tens of millions of dollars and worked to create a performance-based budget for local government. She is a big proponent of financial literacy and supported such initiatives as an adjunct professor. The Treasurer started her financial career supporting micro-lending initiatives in rural India where she saw firsthand how access to capital can positively transform entire communities.    Godlewski dropped out of the Democratic U.S. Senate primary July 29, 2022, clearing the field of major contenders for the party's presumptive nominee, Lt. Gov. Mandela Barnes.