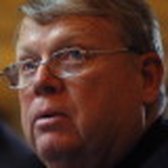 Scott Lingamfelter, R-Prince William, was first elected to the General Assembly in 2001. He represents the 31st District, which includes parts of Prince William and Fauquier counties. He serves as chairman of the house's Militia, Police and Public Safety Committee and is also on the Committees for Appropriations and Education. Lingamfelter ran unsuccessfully for the Republican nomination for lieutenant governor in 2013. Lingamfelter, a business consultant, served in the U.S. Army on active duty for 28 years, retiring in 2001 as a colonel. He was awarded a Bronze Star in 1992. He was born in New York City in 1951. He received a bachelor's degree in history from Virginia Military Institute, Lexington, in 1973 and a master's degree in government and public affairs from the University of Virginia in 1981.