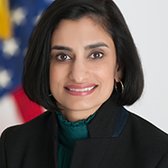 As the Administrator of the Centers for Medicare & Medicaid Services, Seema Verma oversees a $1 trillion budget, representing 26% of the total federal budget, and administers health coverage programs for more than 130 million Americans. She was nominated by President Trump on November 29, 2016 – the seventh nomination by the President-elect – and confirmed by the U.S. Senate on March 13, 2017.