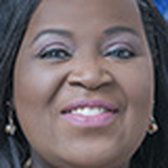 Shelia Stubbs is a former probation and parole agent from Madison.  She has been a member of the Dane County Board of Supervisors, representing a district on the south side of Madison for twelve years. She was nominated as the Democratic candidate for the 77th district of the Wisconsin State Assembly on August 14, 2018, ran unopposed in the November general election, and was sworn into office in January of 2019 as the first African American state legislator from Dane County.