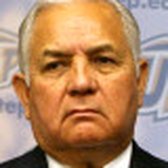 Rep. Reyes, D-El Paso, was first elected to the U.S. House in 1996. He was the first Hispanic American in U.S. history to chair the House Permanent Select Committee on Intelligence, which drafts the laws that govern, fund and oversee the 16 agencies that comprise the U.S. intelligence community. He lost his bid for the Democratic nomination for the seat in 2012 to Beto O'Rourke, a member of the El Paso City Council.