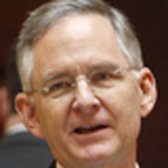 Sen. Thomas K. Norment, Jr., R-3rd, was elected to the Virginia State Senate in 1991. The 3rd District includes all of Gloucester, King and Queen, King WIlliam and New Kent counties, Poquoson and parts of Isle of Wight, Surry, York and James City counties and Suffolk and Hampton. Norment has served as majority and minority leader and currently serves as majority leader since 2012. Norment is chairman of the senate's Courts of Justice Committee. He also serves on the Rules, Finance, Commerce and Labor, and Rehabilitation and Social Services committees. Norment, an attorney with Kaufman and Canoles, graduated from Virginia Military Institute, Lexington, in 1968, and College of Willaim and Mary's Marshall-Wythe School of Law in 1973. He was born in Richmond.