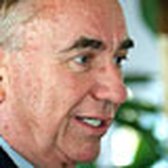 Tommy Thompson, a Republican, was a 2012 candidate for the U.S. Senate from Wisconsin. He served as governor of Wisconsin from 1987 until 2001, when he left office to become President George W. Bush's secretary of health and human services. He previously spent 20 years in the Wisconsin Assembly. Thompson briefly ran for president, withdrawing in 2007.