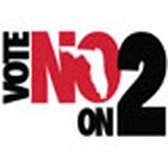 The Vote No on 2 campaign opposes United for Care's proposed 2016 constitutional amendment that would allow medical marijuana in Florida. The campaign is funded by the Drug Free Florida Committee, an anti-drug group started in 2014 by longtime GOP fundraiser Mel Sembler and his wife, Betty, with financial backing from casino magnate Sheldon Adelson.