Television pundits are raising a lot of questions about foreign government donations to the Clinton Foundation during Hillary Clinton’s tenure as secretary of state.

But not everyone get all the details right. Joe Scarborough of MSNBC’s Morning Joe flubbed describing the situation in the April 27 show.

He was discussing a column by the Washington Post’s Ruth Marcus, whose op-ed highlighted an unreported donation to Bill Clinton’s foundation by Algeria in 2010 as an example of sloppiness. The donation, and others like it, raises questions about whether Clinton went "soft" on Algeria for contributing to her husband’s cause under the appearance of earthquake relief in Haiti, Marcus wrote.

Scarborough said the situation will "stink to high heaven" even if it’s a legal gray area.

"I think it was Algeria, maybe, that had given a donation that went unreported at a time when they wanted to be taken off of the terror list in the State Department," Scarborough said. "They write the check, they get taken off the terror list. ... At the same time, and then it goes unreported by the Clinton Foundation."

"Is there a quid pro quo there? I don't know, that's really hard to tell," he said.

Scarborough went on to break down to his panelists how easy it would be to explain to voters what might have occurred.

The problem with all of this isn’t the donation, or questions about a quid pro quo with Algeria. It’s the fact that Algeria wasn’t ever on the terror list. (Media Matters first pointed out what Scarborough said.)

An ally against terror

The list Scarborough mentions is a serious designation given to just four countries the State Department considers state sponsors of terrorism: Syria, Iran, Sudan and Cuba. President Barack Obama is poised to remove Cuba from the list as a show of improved diplomatic relations. (Libya, Iraq and North Korea are the only countries that have been removed.)

The country spent about 20 years locked in a civil war between the military and various Islamist groups after an Islamist group won a 1991 election that was scrapped. The country’s president, Abdelaziz Bouteflika, lifted a state of emergency in April 2011.

But the country continues to struggle with radical violence in neighboring countries. Algeria was attacked by the group that calls itself al-Qaida in the Lands of the Islamic Maghreb almost 200 times in just 2013 in the form of improvised explosive devices, bombings, kidnappings, and fake roadblocks.

The Algerian government is not a state sponsor of terror. But its hands are not clean when it comes to human rights, which is most likely what Scarborough was trying to recall on air.

The Washington Post story that revealed the Algerian embassy’s donation of $500,000 also mention that the one-time gift coincided with increased lobbying visits to the State Department about human rights violations.

In 2010, Algeria spent more than $420,000 lobbying American officials on inter-country relations and on "human rights issues," the Post found, citing documents filed as part of the Foreign Agents Registration Act. The year also saw an increase in meetings between State Department officials and lobbyists representing Algeria, growing from "a handful" of recorded visits in the years before and after to 12 visits in 2010, the Post reported.

The foundation acknowledged it did not alert the State Department about the gift for vetting, which was required under a memorandum of understanding between the Obama administration and the Clintons in an effort to prevent foreign governments from trying to curry favor with Hillary Clinton’s State Department by donating to Bill Clinton’s philanthropy.

So what are the human rights issues Algeria was lobbying on?

Reports by Human Rights Watch, Amnesty International and the State Department outline the activities of a strict authoritarian government that represses its people’s freedom of assembly and association, overuses pretrial detentions, and employs a judicial system that is susceptible to corruption.

The State Department’s 2010 report of human rights issues in Algeria highlights more issues including reports of arbitrary killings, the government failing to account for people who disappeared during the civil war in the 1990s, violence and discrimination against women, and continued restrictions for workers’ rights.

The government of Algeria has resisted inspections by independent human rights groups.

MSNBC's Diana Rocco said Scarborough deserves some credit for indicating he "wasn’t sure it was" Algeria, and that the exchange that followed "clearly shows he’s using it as a hypothetical scenario to make his larger point about how the quid pro quo scenario may have unfolded."

None of that, though, means that Algeria was on the terror watch list in the first place.

Neither Algeria nor other governments revealed to have given to the foundation — Australia, the Dominican Republic, Kuwait, Norway, Oman and Qatar — are sponsors of terrorism, either.

Scarborough was trying to recall the details of a news story about Clinton Foundation donations from foreign governments when he brought up Algeria’s donation to the foundation to try getting off the "terror list."

There are parts about the donations that may not look good for Clinton. Maybe it becomes a legal problem, maybe it’s just a political one. But to claim the foundation took donations from a country on the terrorist list is inaccurate. 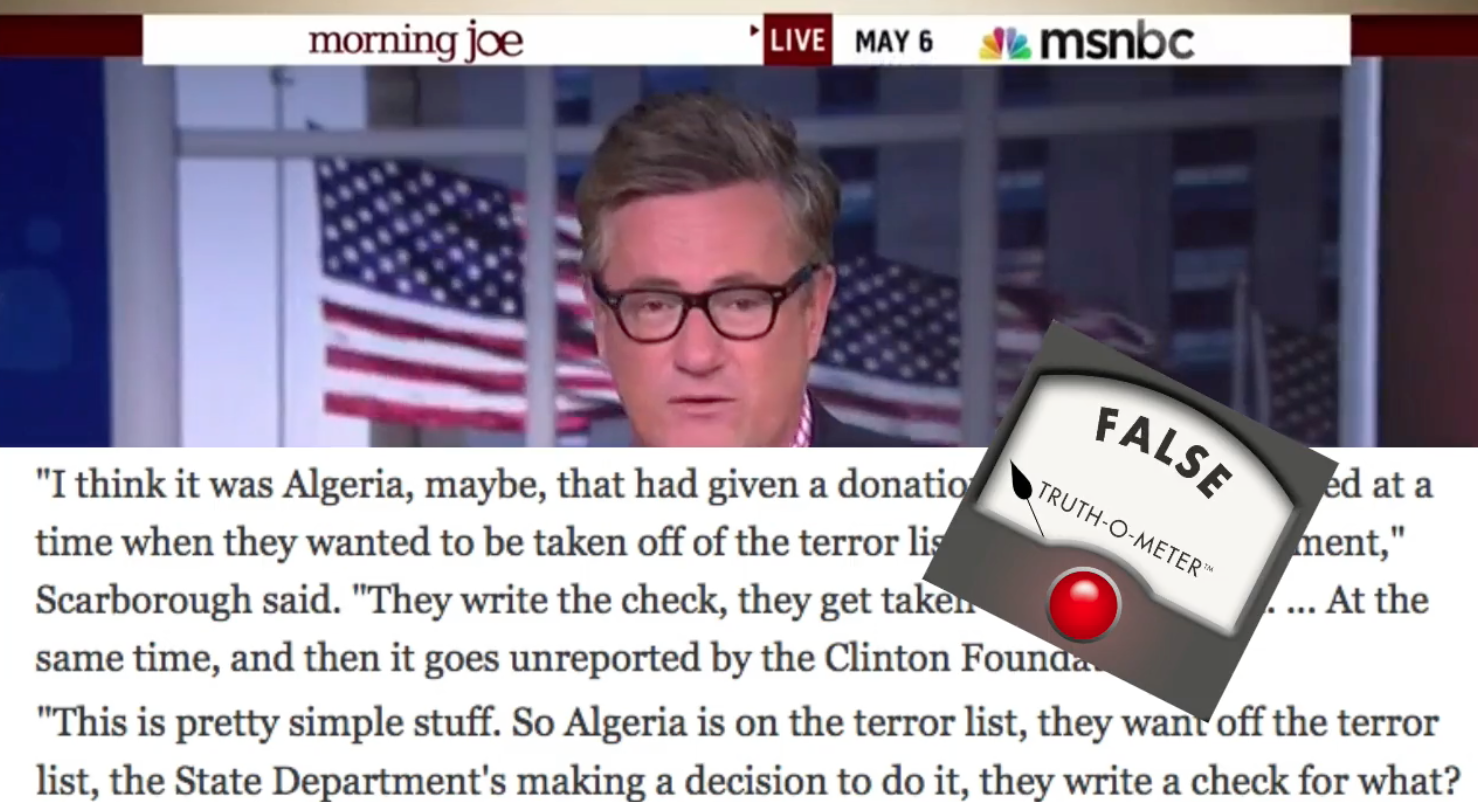 Joe Scarborough discussed our fact-check on his May 6, 2015, show.

Joe Scarborough apologized on his May 6, 2015, show for wrongly claiming that Algeria was on the U.S. terror list.

"I'm not a big fan of public confessions, but I must offer a heartfelt apology to PolitiFact."