"The 'Penny Plan' would reduce non-defense, non-safety net spending by one percent of the previous year’s total each year. Over 10 years, the plan will reduce spending (outlays) by almost $1 trillion without touching defense or entitlement spending."

President Donald Trump pledged to reduce federal spending by enacting the "penny plan," which would reduce non-defense and non-entitlement spending by 1% a year.

But even before the coronavirus pandemic forced the government to unexpectedly pass the $1.7 trillion CARES Act, the president signed spending bills that broke this promise by increasing that category of spending. Non-defense discretionary spending includes programs at a wide range of federal agencies, from Agriculture and Education to Transportation and Health and Human Services.

This chart shows the amount of federal spending excluding defense outlays and mandatory spending. The latter category includes such programs as Social Security and Medicare as well as interest on the debt. 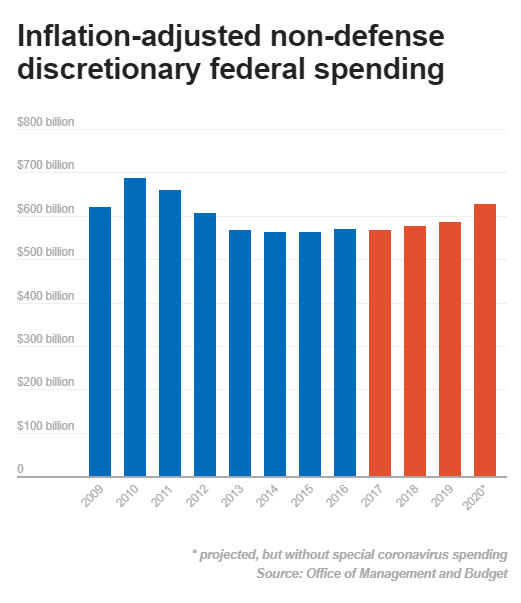 If the penny plan had been enacted, the red bars, showing Trump's tenure, would be falling, rather than rising.

"You don't have to look any further than that Trump signed spending bills in 2018 and 2019 that dramatically increased discretionary spending across the board without any offsets," said Steve Ellis, president of Taxpayers for Common Sense.

"Both defense and non-defense spending have increased substantially since Trump took office, thanks largely to the expansive and unpaid for Bipartisan Budget Acts he signed," said Marc Goldwein, senior vice president and senior policy director for the Committee for a Responsible Federal Budget. "No major part of the budget has been cut nominally by 1% or 2% per year as under the penny plan or two penny plan."

The plan says it would reduce non-defense and non-entitlement spending by 1 percent each year.

"Over 10 years, the plan will reduce spending (outlays) by almost $1 trillion without touching defense or entitlement spending," the campaign said.

Trump's 2018 budget proposal doubled the suggested yearly reductions. It projected non-defense spending would decrease from $462 billion in 2018 to $385 billion in 2027. This, along with other budget changes, would result in a $16 billion surplus in the next decade, according to the proposal.

As we have previously reported, the budget proposal relies on what experts have called "rosy" assumptions about the rate at which the economy will grow. Republicans, on the other hand, argue that proposed changes to the tax code would provide an economic boost.

In October, the Senate and the House passed a budget blueprint that would also allow Republicans to pass tax legislation without the need for Democratic votes. The budget does not include Trump's proposed penny plan. Early estimates by the Congressional Budget Office of the tax plan's effect on the budget expected a more than $1.4 trillion increase to the federal deficit.

Sen. Michael Enzi, R-Wy., a supporter of the penny plan, might introduce legislation to implement it in the future, said Enzi's press secretary, Max D'Onofrio.

Since Congress hasn't taken steps to incorporate the plan into the budget, and we don't yet have a timeline on when that could happen, we rate this promise Stalled.